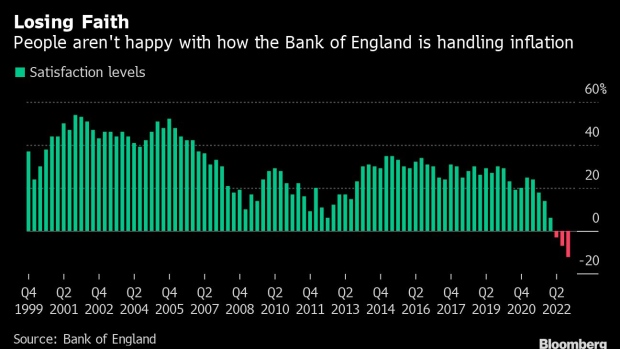 (Bloomberg) -- The Bank of England said the expectations that British consumers have about where inflation is headed drifted further above its 2% target, and more people were dissatisfied with the way the central bank is doing its job.

The central bank said consumers in November expected prices across the economy to rise about 3.4% within the next two years, up from 3.2% when the survey by Ipsos was last conducted in August. Asked about inflation in five years’ time, respondents gave a median answer of 3.3%, up from 3.1%.

The figures add to concerns that rising prices are becoming embedded into the UK economy, adding to evidence that the BOE must act to rein in inflation that leaped to a 41-year high of 11.1% in October. Policy makers have lifted their benchmark lending rate eight times in the past year from near zero to 3%, and investors expect another increase next week.

The survey also showed record dissatisfaction with the way the BOE is managing monetary policy, with a net balance measuring sentiment registered minus 12% in November, the lowest since the research started in 1999. That was down from minus 7% in August.

Asked what the BOE should do with interest rates, 20% thought they should go up, down from 30% in August. The BOE said 30% of respondents reckoned rates should fall, up from 24% previously.