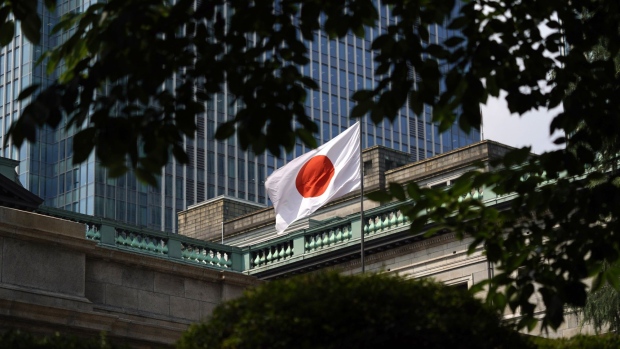 A Japanese national flag flies outside the Bank of Japan (BOJ) headquarters in Tokyo, Japan, on Thursday, June 20, 2019. The BOJ kept monetary policy unchanged, just hours after the Federal Reserve became the latest central bank to signal a willingness to cut interest rates in the face of rising threats to global growth. Photographer: Toru Hanai/Bloomberg , Bloomberg

That’s the view of analysts assessing the circumstances of a central bank already facing criticism that its massive buying of assets is overstretched and distorting markets. After nearly seven years of the BOJ failing to attain its main 2% inflation target, economists see little imperative for the bank to add to its goals.

The BOJ is already deeply involved in purchasing exchange-traded funds and real estate investment trusts without a clear exit strategy, “and it’s suffering,” said economist Hideo Kumano at Dai-ichi Life Research Institute in Tokyo. “It’s unlikely that it will put itself in an even more difficult position by targeting green bonds.”

Climate Change Might Hit Economy Harder and Faster Than Thought

Whether central banks can step up to play a role in tackling climate change has attracted increasing attention since European Central Bank President Christine Lagarde signaled in September that she was open to considering targeting green bonds. That comment resonated with Bank of England Mark Carney’s efforts to get the financial world to help address climate change. Other central bankers including Bundesbank President Jens Weidmann and Federal Reserve Chairman Jerome Powell say the issue goes beyond their remit.

So far Japan’s central bank has given no indication that it’s considering targeting green bonds, though in theory there is nothing stopping it from buying such securities it they meet its criteria.

While the BOJ has joined the Network for Greening the Financial System, a coalition of monetary authorities working on climate finance issues, Governor Haruhiko Kuroda said last month that central bankers shouldn’t be expected to do the heavy lifting on tackling climate change.