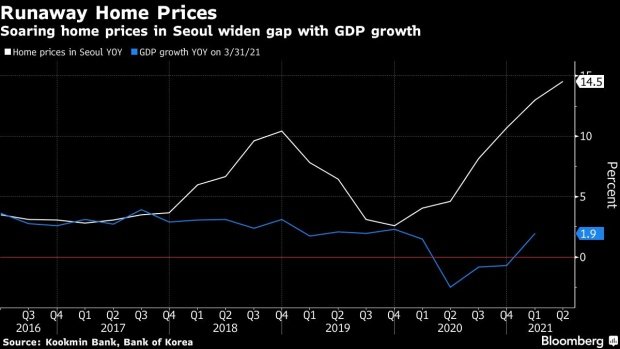 Such imbalances could impact the economy negatively if there’s a shock triggering a correction in the asset market and a rapid deleveraging of debt, the Bank of Korea said Tuesday in a semi-annual report on financial stability. Korea is facing larger mid-to-long term financial risks than it did before the pandemic, it said.

Real estate in particular is believed to “significantly overpriced” considering the country’s economic conditions, it said. The burden of debt repayment is growing among households as they struggle to improve income.

The report follows a series of comments by Governor Lee Ju-yeol and other board members suggesting they will rein in the unprecedented stimulus unleashed during the pandemic at some point. A majority of private economists surveyed by Bloomberg expect the BOK to start raising its benchmark rate by early next year as it grows more confident of the economy’s recovery.

On assets, the BOK said while the gains partly reflect optimism over the economy once the pandemic recedes, some are likely overpriced. Considering long-term trends, Seoul home prices are excessive relative to people’s incomes, it said. While risk appetite in the equity market has increased, price-to-earnings ratios remain low compared to other major economies, the bank said.

On cryptocurrencies, the BOK said it’s difficult to find “rational grounds” to explain the rally during the pandemic.

The BOK cut its rate by a total of 75 basis points last year, and has kept it at a record low of 0.5% since May 2020. The ratio of Korea’s debt-to-disposable income reached 171.5% at the end of the first quarter, a 11.4 percentage point jump from a year earlier, the report showed.

The BOK also weighed in on climate issues. It said the risks to the economy and banks’ capital adequacy ratios should grow significantly from 2040, when costs to reduce greenhouse gas are set to rise rapidly. Korea aims to become carbon neutral by 2050.

By 2050, the central banks expects a 2.7%-7.4% loss in gross domestic product compared to 2020 from implementing policies to reduce greenhouse gas emissions. Capital adequacy ratios at domestic banks are likely to fall by 2.6 to 5.8 percentage points during the period due to declining prices of financial assets related to high carbon-emitting activities.