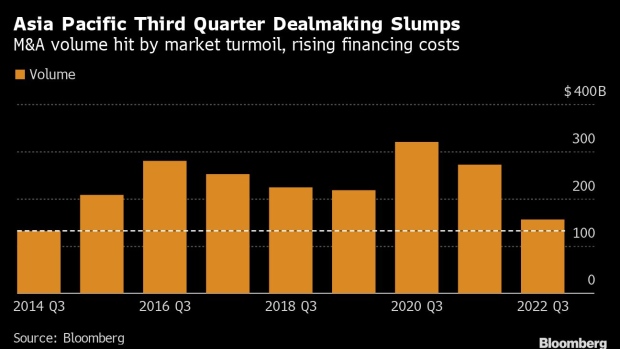 The city skyline stands in the distance as vessels and barges are docked in New Yau Ma Tei Typhoon Shelter in Hong Kong, China, on Monday, July 27, 2020. Hong Kong's economy may take longer than expected to recover due to the fluidity of the local virus situation and global economic uncertainties, Financial Secretary Paul Chan said. Photographer: Paul Yeung/Bloomberg , Bloomberg

(Bloomberg) -- Asia’s financial hub is letting people go on a proper holiday for the first time since the pandemic began. For bankers in Hong Kong, the chance to take a break also speaks to a steep fall in dealmaking activity -- in the city, and across the region.

While the decline has been global, it’s been particularly acute in Asia Pacific. The volume of mergers and acquisitions in APAC plunged by more than 40% from last year to about $156 billion in the third quarter, the worst such period since 2014, according to data compiled by Bloomberg. In China, Asia’s biggest market, M&A activity was the weakest of any third quarter in a decade.

Global economic and geopolitical uncertainty, along with a rollercoaster stock market, are making deals harder to come by, particularly as financing them has become more expensive. A potential $13 billion takeover of Australian hospitals operator Ramsay Health Care Ltd. by a KKR & Co.-led group fell apart after series of derailed proposals. Rising financing costs were among the reasons the deal didn’t proceed, Bloomberg News has reported.

With a string of banks facing losses from buyout debt, dealmakers are adjusting their strategy.

Some boards are taking a wait-and-see approach before pursuing transactions, particularly big acquisitions, and have instead shifted their focus towards small-to-mid sized deals, said Kerwin Clayton, co-head of M&A for Asia Pacific at JPMorgan Chase & Co.

“Despite the macro uncertainty, companies continue to evaluate M&A options as a tool to boost growth,” Clayton said.

Several firms have been busy hunting for deals outside the region, according to Clayton.

“There’s an increasing appetite from businesses across Asia Pacific to expand overseas, with heightened interest in the US,” he said.

Singaporean sovereign wealth fund GIC Pte teamed with Oak Street to acquire Store Capital Corp., a real estate investment trust in the US that counts Warren Buffett’s Berkshire Hathaway Inc. as an investor, in an all-cash deal valued at about $14 billion.

The availability of debt is playing less of a role in getting deals done, especially in the more developed Asian economies, said Jung Min, co-head of M&A at Goldman Sachs Group Inc. in Asia ex-Japan.

“Strategics are now finding valuations attractive,” Min said. “They are looking beyond the cycle and positioning for the long term, and asking themselves what they want to be after it has passed.”

Private equity firms have also been at the forefront of transactions given their vast amounts of dry powder and the need to deploy capital, Min said.

Any potential recovery of deal activity in the region would have to include the world’s second-largest economy, where much depends on the sectors that are in favor.

“We expect we will see most dealmaking and investments going to the so-called hard-tech and advanced manufacturing sectors that help promote China’s competitiveness,” according to Erica Su, global emerging markets leader and managing partner at EY China. Carbon neutral sectors are also among the country’s top priorities, she added.

Even China outbound deals could make a comeback as companies eye more quality assets over the next couple of years, according to Su. Some privately-owned businesses may turn to M&A as they seek to build e-commerce logistics systems outside of China, Su said.

Read More: Record Run of M&A Quarters Is Over

Despite the grim data of the last three months, dealmaking activity in Asia Pacific could pick up in the next few quarters, JPMorgan’s Clayton said.

”We’re poised to see an increasing number of deals in sectors such as clean energy in APAC, as companies accelerate their transition into the new economy,” he said.