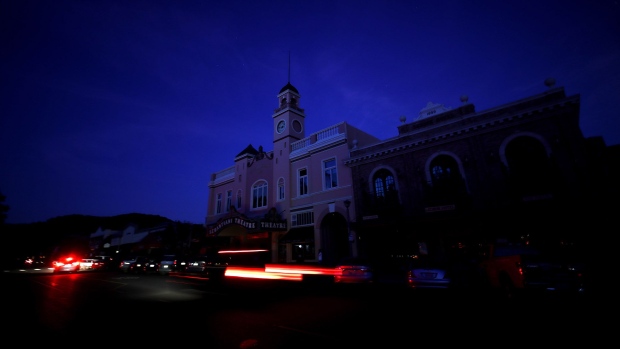 The Sebastiani Theatre and much of downtown remained dark on October 10, 2019 in Sonoma, California. , Photographer: Ezra Shaw/Getty Images

(Bloomberg) -- Lose your lights? The blame could be laid on PG&E Corp.’s entanglement in the legal system.

PG&E’s decision to cut power to millions of Californians to prevent wildfires amid dry and windy weather conditions may be linked to the added liabilities it could face if its equipment is found to spur yet another blaze, said Jared Ellias, professor at the University of California Hastings College of Law in San Francisco.

Such a scenario could delay its exit from bankruptcy, blow up restructuring negotiations and force the utility to fully pay any new claims in cash, with pre-bankruptcy wildfire victims moved to the end of the line, according to Ellias.

“They have strong incentives created by bankruptcy law to be extra conservative at the moment,” Ellias said by phone. “I don’t know if they’re thinking about it, but they would be negligent if they were not.”

PG&E, meanwhile, says its only interest in shutting down the power is “the safety of our customers and the communities we serve.” The wildfires of the past two years “have made it clear that more must be done, and with greater urgency, to adapt and address the issue,” Lynsey Paulo, a company spokeswoman, said in an email.

PG&E is on federal probation after a natural gas pipeline explosion in 2010 that destroyed a neighborhood and killed eight people. After that incident, state regulators began a probe of the company’s safety culture that was expanded after the utility’s equipment was found to have sparked a series of deadly wildfires.

The judge overseeing PG&E’s probation has told the utility that he doesn’t want it to spark any more fires and went as far as to recommend that the company cut power during dry and windy conditions to keep people safe, even if it leads to inconvenience.

“PG&E is now more exposed to potential liabilities,” Paul Fremont, a Mizuho Securities USA Inc analyst, said by phone. This may be at least a contributing factor influencing the company’s decision to turn off the power.

To contact the reporters on this story: Gerson Freitas Jr. in São Paulo at gfreitasjr@bloomberg.net;Mark Chediak in San Francisco at mchediak@bloomberg.net

To contact the editors responsible for this story: Lynn Doan at ldoan6@bloomberg.net, Reg Gale, Pratish Narayanan