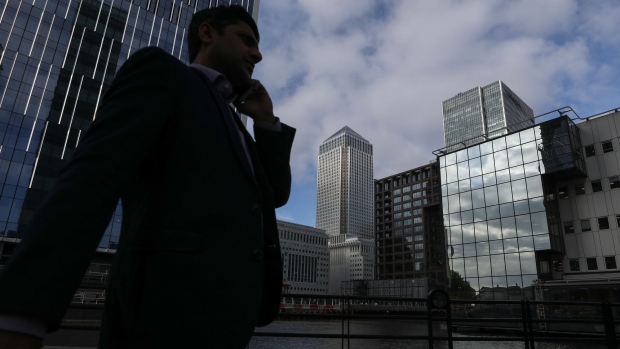 (Bloomberg) -- Banks complained for years about the UK’s bonus cap. But now the government has pledged to scrap it -- triggering a political backlash -- most are silent.

With the new rules potentially coming into effect in a year’s time, lenders have yet to say whether they will abandon existing pay arrangements that saw salaries jump after the introduction of the cap.

That reserve, according to pay experts, is because executives recognize that reverting to lower salaries and higher bonuses will be a legal and human resources minefield. As a result, pay structures may only evolve gradually over years.

“It is not going to be straightforward,” said Tom Gosling, an executive fellow at London Business School, who previously set up PwC’s executive pay practice. “The high salaries are contractual. You cannot unilaterally take them away.”

The European Union introduced a bonus cap of up to two times salary in 2014 on firms’ “material risk takers” in response to public fury about the financial crisis. The UK unsuccessfully opposed the cap, on the grounds it would distort pay and hit London as a financial center.

Since Brexit, the Conservative Party has returned to the politically contentious topic as part of its drive to create “Big Bang 2” opportunities to boost the UK’s competitiveness.

But most industry leaders weren’t pushing for the cap’s reversal, and are now unsure how to proceed. They are also waiting for more details from the Prudential Regulation Authority, which is taking the government’s pledge forward through a consultation.

Among the banks weighing what to do is JPMorgan Chase & Co., whose European investment banking headquarters is in the UK. It cannot make any decisions until it has clarity, according to a person familiar with the matter.

That caution is echoed across the sector, with firms reluctant to attract criticism from the public or their own employees. Another consideration is the possibility the Labour Party - currently ahead in opinion polls - wins the next general election and reintroduces the bonus cap.

Banks have already upended their payment structures to accommodate the cap. Citigroup Inc. awarded Paco Ybarra, the London-based head of its investment bank, $8.97 million in fixed pay for last year, compared to a $750,000 salary for other top executives based in the US. That allowed Ybarra’s total compensation of $21 million to fit within the bonus cap rules.

The top 18 investment banking senior managers in Goldman Sachs Group Inc.’s UK unit had average fixed compensation of $4.45 million last year, more than double the US-based CEO’s salary. JPMorgan gave Daniel Pinto, the bank’s chief operating officer and president, a fixed allowance of $8.4 million in 2021 because he was based in the UK. In comparison, Jamie Dimon, the CEO, received a $1.5 million salary.

American banks may be first to restructure their pay, according to Gosling. “The bonus cap is an anomaly compared with their business in the rest of the world. They pay quite well and have the cache of that reputation so are in a strong position to push through change,” he said.  “There is less obvious upside to change for the UK-headquartered firms.”

Richard Gnodde, head of international operations at Goldman Sachs Group Inc., has previously told the Financial Times that removing the cap would make “London a more attractive place for sure”. The bank declined to comment further on the UK plan to lift the cap.

Spokespeople at Morgan Stanley, Bank of America Merrill Lynch and Wells Fargo & Co. all declined to comment on whether they would change their pay policy once the cap is lifted.

Among UK lenders, Barclays Plc’s CEO C.S. Venkatakrishnan said this week that it was “too soon to say” how the bank would react. “It’s not just that rule, it’s how competitors also decide to pay people, how the industry moves.” Charlie Nunn, CEO of Lloyds Banking Group Plc, said the lender - which employs far fewer staff in roles with large bonuses - said it would not “take advantage” of the cap being lifted. Both were speaking at the FT Global Banking Summit.

Representatives for HSBC Holdings Plc and Standard Chartered Plc declined to comment. As the bonus rules apply worldwide, both currently impose the cap on their traders in Asia and the US. Meanwhile, EU-based banks such as Banco Santander SA and Deutsche Bank AG will have to stick to the cap on UK employees unless the rules change in the bloc.

UK Finance, the industry’s trade body, said: “While levels of remuneration are decided by individual firms, making the UK an attractive place to do business is an important part of ensuring the industry can compete globally.”

Among staff, any change could be divisive, according to Nic Stratford, partner and senior executive reward consultant at Mercer. “For superstars, in the old world they could receive much higher amounts for higher performance, so the change will be welcome.”

For others, it will be uncomfortable. “People have got used to a certain amount of fixed pay,” Stratford said. “They will have worked out their mortgages around having that amount of fixed pay.” To make the impact slightly easier, the PRA might reduce deferral periods on bonus pay-outs from the current maximum of seven years.

Banks may make changes in areas such as trading where income is volatile and so performance-based bonuses have historically swung dramatically, but not in risk and control, which is more stable and not worth the pain of pushing through new contracts, according to London Business School’s Gosling.

Banks may want to avoid two entirely different systems for new and existing staff because of the complexity, but they could make greater use of allowances. “One possibility for new hires, instead of a salary of £1 million ($1.2 million), is to go back to a system of reduced salary of, say, £200,000, a non-contractual allowance of £800,000 and a bonus,” said Gosling. “That might make it easier to change to a lower salary system in future.”

The current bonus season -- paid out early next year -- won’t be much of a test of what is to come because 2022 is set to be a gloomy year for bonuses overall. That reflects the low levels of deals and equity raisings, although those in fixed income may be more optimistic about their pay-outs.

That may make bankers feel particularly grateful for their high fixed salaries, and concentrate their minds on the risks of losing them, according to Jason Kennedy, CEO of recruitment firm Kennedy Group.

Contrary to the Conservative Party’s hopes of boosting home-grown banks, scrapping the cap could hinder UK lenders. Bankers who like high guaranteed pay may think about moving to jobs with EU firms, where the cap is still in place.

Others may take a punt on moving to hedge funds, Kennedy said. “Now that the safety net is going they may say I might as well take a risk on the buy-side.”

--With assistance from Marion Dakers.