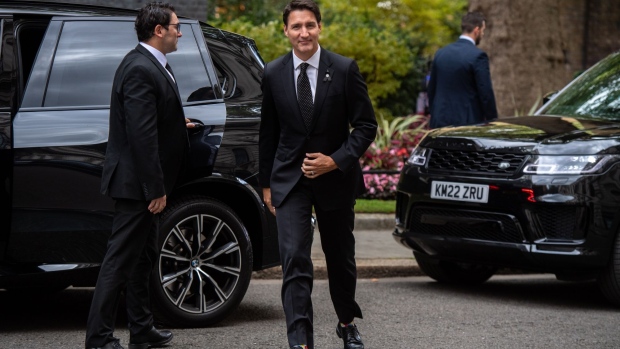 Justin Trudeau, Prime Minister of Canada, arrives for a meeting with Liz Truss, UK prime minister, at 10 Downing Street in London, UK, on Sunday, Sept. 18, 2022. Truss will also meet a number of other leaders ahead of the state funeral of Queen Elizabeth II in Westminster Abbey on Monday. , Bloomberg

The Canada Recovery Dividend -- a one-time, 15% tax on domestically-generated profits over C$1 billion in the past two years -- is expected to raise C$3.02 billion in government revenue, the Parliamentary Budget Officer said Thursday.

The other tax hike -- a 1.5-percentage-point increase to the corporate rate paid on banks and life insurers’ income over C$100 million -- will raise C$2.25 billion through 2027, the agency said.

The figures released Thursday are lower than the C$6.1 billion the government estimated in its April budget.

Trudeau pledged to impose the new taxes on the campaign trail last year, targeting the “extraordinarily large profits” banks had reaped during the pandemic in a bid to win over left-leaning voters. The new levies faced opposition from bank executives, who said it was unfair to single out their industry and highlighted the benefits banks provide to retirees through dividend payments.

Analysts also said that the taxes may backfire by encouraging the banks to pass along the costs to consumers through higher fees.