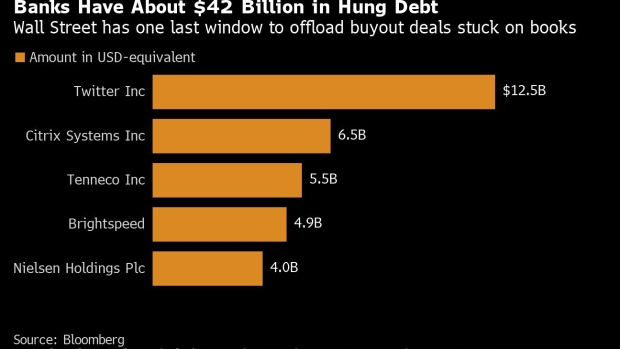 (Bloomberg) -- Banks in the US and Europe with around $42 billion of buyout debt stuck on their balance sheets are making the most of their last chance to get rid of it this year.

Stabilization in the leveraged loan and high yield bond markets has led to an opening for deals -- including for bonds and loans tied to the buyout of TV ratings business Nielsen Holdings Plc -- as banks try to reduce debt on their balance sheets before the holidays. Offloading the so-called hung debt, even at steep discounts, confines losses to this financial year while also appeasing risk departments and regulators.

There may be more to follow. A group of lenders including Goldman Sachs Group Inc. is nearing an agreement to sell €1.5 billion ($1.56 billion) of a junk loan backing the buyout of Unilever’s tea business, while other deals could also come before the year end.

“If the window is open for these hung deals, you will see the banks jump through it because the window is not open for every deal,” said Bill Zox, portfolio manager at Brandywine Global Investment Management. “And it could shut again at any time.”

Hung debt has been a big problem for Wall Street this year. Banks have taken huge mark-to-market losses on deals they underwrote before a rapid rise in interest rates crushed funding markets and the threat of recession quashed investor demand for riskier assets. With that backdrop, stabilization of leveraged loan prices -- which recently recovered to an average of close to 93 cents on the dollar in the US, according to index data -- has created a fertile ground for deals.

Still, while some debt is being offloaded, more recent buyouts are adding to the pile, including about $13 billion of financing related to Elon Musk’s acquisition of Twitter and, more recently, a private equity buyout of a majority stake in Roper Technologies Inc.’s industrial operations business.

That brings the total amount of debt funded by banks for buyouts and acquisitions in the US and Europe to around $42 billion, according to data compiled by Bloomberg.

Despite a slightly better market window now opening up, some recent deals have come with steep discounts. Nielsen’s leveraged loan sale saw strong demand at 89 cents on the dollar, while the Unilever tea business loan is expected to price in the low-to-mid 80% of face value, according to people close to the matter.

But for many lenders, offloading chunks of hung debt -- even at a discount -- is better than letting it languish on their books, tying up capital that could be deployed elsewhere. The bargain prices also help attract new buyers, such as Apollo Global Management Inc., which raised a $2.4 billion fund to scoop up such loans.

In Europe, where the pile of hung debt is smaller, leveraged loan prices have risen from their October lows to an average of around 91 cents on the euro, according to S&P’s index. Along with the issuance of new collateralized loan obligations -- the biggest buyers of leveraged loans -- that’s led to some opportunistic deals.

Some sales, such as an underwritten loan for French property management firm Emeria, previously known as Foncia, were on the agenda for a while. That deal was upsized twice during syndication after it got more demand than initially expected. But other deals have come to the market to make the most of the year-end window, such as add-on deals by chemicals firm Caldic and sanitary service provider Toi Toi & Dixi Group.

Amazon.com Inc. is looking to sell investment-grade bonds for general corporate purposes, which may include repayment of debt and acquisitions, in its second dollar offering this year.

Issuers continued to seize the final window for bond issuance in Europe’s primary market this year, with Orsted, Toyota and Vodafone among the borrowers raising new debt.

Chinese property bonds rose both onshore and offshore after Beijing lifted a ban on local share sales by developers, in its latest step to ease the sector’s cash crunch.

--With assistance from Adeola Eribake.