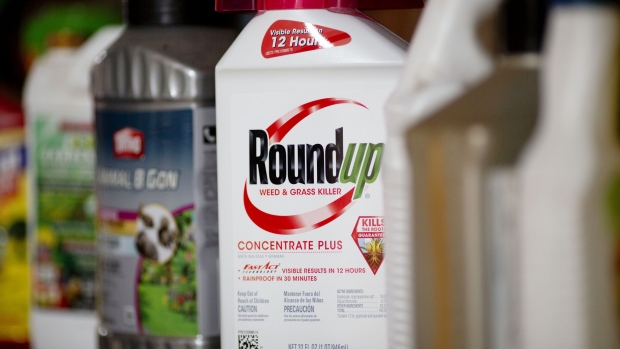 Weeds are sprayed with a bottle of Bayer AG Roundup brand weedkiller in this arranged photograph outside a home in Princeton, Illinois, U.S., on Thursday, March 28, 2019. Bayer vowed to keep defending its weedkiller Roundup after losing a second trial over claims it causes cancer, indicating that the embattled company isn't yet ready to consider spending billions of dollars to settle thousands of similar lawsuits. Photographer: Daniel Acker/Bloomberg , Bloomberg

(Bloomberg) -- Bayer AG failed to settle outstanding U.S. Roundup lawsuits by Monday, the deadline set by a judge who has said he’ll resume federal trials over claims the weedkiller caused consumers’ cancer.Ahead of its release of an earnings statement Tuesday, Bayer disclosed in a court filing that 1,861 cases out of about 3,787 lawsuits aren’t controlled by agreements with plaintiffs’ lawyers. U.S. District Judge Vince Chhabria in San Francisco, who is overseeing all Roundup suits filed in federal courts, warned the company in September that he will move at full speed to set trials after keeping cases on hold for months to allow for negotiations. The company is scheduled to appear before the judge again on Nov. 9.The missed deadline is important because settling the Roundup suits and preventing them from going to trial is a central component of the company’s attempt to contain them. After Bayer lost three Roundup trials in 2018 and 2019 with average awards of almost $50 million per plaintiff that sent its stock into a downward spiral, the company can ill-afford another loss. The legal threat has weighed on Bayer since its 2018 acquisition of Monsanto, maker of the herbicide.“The parties remain actively engaged in ongoing settlement discussions,” according to the court filing. “Monsanto is making contact with all of the counsel who represent these 1,861 plaintiffs.”

Read More: Bayer Confronts Judge’s Deadline as Roundup Settlements LagBayer had no immediate comment on the court filing.The vast majority of U.S. Roundup cases are in state courts and aren’t subject to Monday’s deadline. The company previously said it had finalized accords to resolve about 44,000 U.S. lawsuits, or about 35% of the more than 125,000 filed and unfiled cases alleging Roundup causes cancer.

Bayer told Chhabria at a September hearing it was optimistic about the progress of settlement negotiations. Ken Feinberg, the court-appointed mediator in the litigation, assured the judge it won’t be necessary to send any more cases to trial because they’ll be settled.The case is In re Roundup Products Liability Litigation, 16-md-02741, U.S. District Court, Northern District of California (San Francisco).