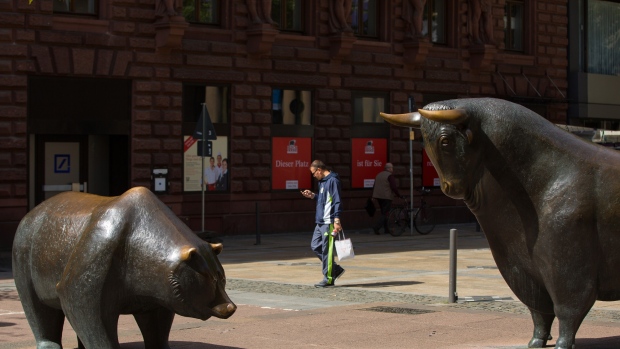 A pedestrian walks past a bear and a bull statue outside the Frankfurt Stock Exchange in Frankfurt, Germany, on Monday, July 4, 2016. London Stock Exchange Group Plc shareholders approved Deutsche Boerse AG's acquisition of the 300-year-old exchange Monday in a near-unanimous vote. , Photographer: Bloomberg/Bloomberg

There’s nothing like a dovish Federal Reserve to threaten junk-bond bears. Well, maybe not just yet.

Investors around the world continued to keep a very cautious stance on markets on concern the Fed cut may not be enough to prevent the coronavirus from slowing down economic growth. While the magnitude of the move was seen by many as aggressive, Chairman Jerome Powell seemed to unnerve investors by saying the virus outbreak will weigh on activity “for some time.”

Short interest as a percentage of shares outstanding on HYG jumped to a whopping 57 per cent, according to data from S3 Partners. After eight consecutive days of withdrawals, the fund posted an inflow of US$987 million in the latest trading session -- the biggest since June, according to data compiled by Bloomberg.

“Last week demand dried up, but with bond yields likely to remain low for a long time following the Fed rate cut, investors believing the U.S. economy will avoid a recession will flock to it,” said Todd Rosenbluth, director of ETF research for CFRA Research. “Those that are concerned about a recession will take the other side of that trade.”