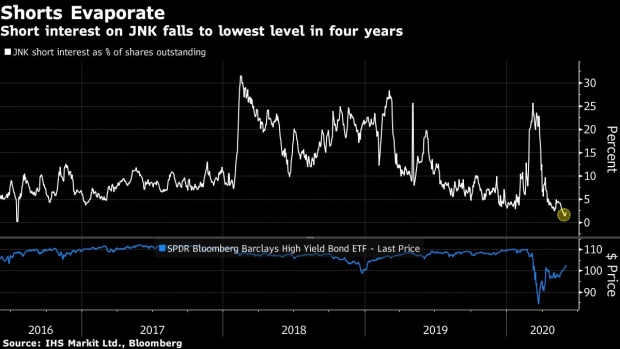 (Bloomberg) -- Bearish bets on exchange-traded funds that track high-yield bonds plunged as the Federal Reserve stepped into the market.

Short interest as a percentage of shares outstanding on the $12 billion SPDR Bloomberg Barclays High Yield Bond ETF, ticker JNK, sank below 2% -- a four-year low -- after surging to as high as 25% in early March, according to data from IHS Markit Ltd. For the $25 billion iShares iBoxx High Yield Corporate Bond ETF, ticker HYG, bearish wagers are at the lowest level this year.

After the Fed pledged to shore up credit markets in March, investors have rushed in to front run the move, with the announcement alone causing enough demand to restore order. The central bank’s backstop is giving investors confidence to step into the market despite growing social unrest, uncertainty about coronavirus spread and increased tension between the U.S. and China.

“We are seeing investors get long high yield as the market continues to recover,” said Mohit Bajaj, director of ETFs for WallachBeth Capital.

In May, HYG saw the best month of inflows in its history, with $4.3 billion added, and its assets ballooned to a record. JNK took in $994 million -- its third straight month of inflows. Both have risen more than 21% from their March 23 lows.

Despite the enthusiasm for junk-bond ETFs, the central bank’s purchases so far have been concentrated in high-grade funds such as the iShares iBoxx $ Investment Grade Corporate Bond ETF, ticker LQD, and Vanguard Intermediate-Term Corporate Bond ETF, or VCIT. The Fed has bought barely $3 billion of corporate debt-tracking funds as of May 26, just 1.2% of the $252.7 billion market for credit ETFs.