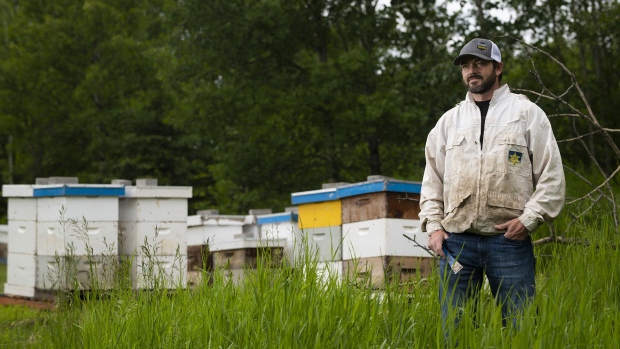 It’s flowering season at Nicolas Pedneault’s farm in the French-speaking Canadian province and every bee that lands on a blossom helps boost his blueberry crop. Hundreds of hives dot his fields, but he needs more—and can’t get them.

“We don’t have enough pollinators,” said Pedneault, who fears his output will be slashed. “Every honeybee hive we don’t get is impacting our fields.”

Blueberry growers across the entire country face similar troubles due to a shortage of the commercial hives they rely on to boost their bounty of Canada’s most valuable fruit crop. Canadian beekeepers have on average lost half their colonies this year, and in some areas there’s almost total collapse. That leaves berry farmers with a crippling bee shortage and few suppliers to fill the void.

“We probably haven’t seen this high of losses since one of our early years in beekeeping,” said Kevin Nixon, who has been in the business for nearly three decades. He lost 40% of the 10,000 hives he manages south of Red Deer, Alberta. “I know some guys that lost 90%.”

Beekeepers worldwide have been reporting massive honeybee deaths for years, but in parts of Canada this year’s losses are catastrophic. The impact on the C$274 million ($211 million) blueberry market in Canada, the world’s seventh largest exporter, is a warning to the world of what happens when there is a breakdown in the fragile pollination industry.

“I’ve not heard of other places where there’s been a pollination shortfall,” said Robert Paxton, zoology head at Germany’s Martin Luther University Halle-Wittenberg. “Beekeepers are having more problems maintaining their colonies and there’s more demand for their colonies for pollination.”

The industry in North America has expanded to support a boom in fruit and vegetable acres as wild bee numbers withered. Beekeepers who struggled to make money selling honey started renting out hives to farmers seeking to boost yields. “Pollination brokers” connected growers with hives, which today crisscross the continent on semi trucks to reach their destinations.

Bees play a key role in spreading pollen between flowering plants to trigger reproduction, ultimately giving the world nutritious and colorful foods such as apples, cherries, melons and almonds. More than 100 US crops rely on pollinators and the added revenue they bring to crop production is valued at $18 billion annually, according to the US Department of Agriculture.

“The paradigm of bringing in honeybees is at a breaking point,” he said. “Bees are not getting better; they are slowly getting worse.”

Death rates among honeybee colonies have been a concern for decades, and staggering losses first reported in the US in 2006 raised further alarm. The phenomenon appeared in other countries too and has been attributed to issues ranging from extreme weather and crop-chemical exposure to parasites. American beekeepers typically lose an average of 40% of their bees a year, while losses in Canada average around 20%.

Despite die-offs, studies suggest the number of managed honeybees rose more than 80% since the early 1960s as beekeepers expanded alongside rising agricultural demands.

“We’ve built this dependency on managed pollinators, specifically honeybees,” said Maggie Shanahan, a beekeeper and researcher at University of Minnesota’s Spivak Lab. “We’ve created this demand for commercial pollinators that we move around in pollination units. That’s pretty far from the natural environment where a honeybee could thrive.”

Canada’s latest losses underscore the challenges of replacing commercial colonies when regular suppliers fall short. As many as 400,000 colonies were lost this year and there are few options to replace the hives, according to the Canadian Honey Council. Canada imported 40,000 packages of bees—each can be used to rebuild a lost hive—but that’s barely 10% of what’s needed to stem losses. A 2 pound package holds about 8,000 bees.

New Zealand accounted for 85% of Canada’s honeybee imports by value in 2020, with the rest split between Chile and Australia, according to Statistics Canada.

“We need to find a way to get more pollinators in North America” besides importing from Australia and New Zealand, said Jason Smith, chair of the BC Blueberry Council in the westernmost Canadian province.

Blueberries are Canada’s top fruit export, representing 61% of the value and almost half the volume shipped in 2020. British Columbia, the nation’s biggest cultivated blueberry producer, is probably short around 20,000 hives, said Smith, a grower in an agricultural community east of Vancouver.

“The number of bees we need this year highlights how susceptible the industry is to a disaster situation,” said Rod Scarlett, Canadian Honey Council’s executive director. “The greater fear is if we have something close to this next year, things like the pollination industry and the fruit crops and even canola seed could be in jeopardy.”