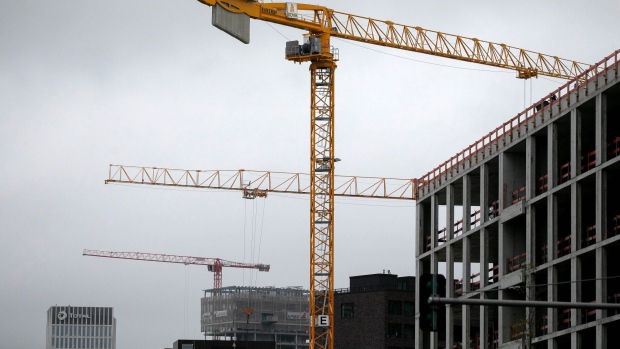 Residential apartments under construction in the Mitte district of Berlin, Germany, on Wednesday, Sept. 22, 2021. After years of poor levels of investment in public infrastructure, there’s a broad consensus among all political parties that more will be needed in the coming decade. Photographer: Krisztian Bocsi/Bloomberg , Bloomberg

(Bloomberg) -- A Berlin referendum to expropriate the housing of large property companies in the German capital was headed for victory on Sunday.

More than 56% of voters backed the proposal with 90% of precincts reporting, the city-state’s election board said on its website. While the measure isn’t legally binding, it could mean transferring about 226,000 apartments into public hands if enacted -- including those of Deutsche Wohnen SE, which owns more than 100,000 units in Berlin.

The local vote, which applies to property companies that own more than 3,000 rental units, underscores the growing divide between people feeling squeezed out of an increasingly expensive rental market and those who want to maintain Berlin as a hub that attracts companies, capital and housing investment.

“It’s not a good signal for Germany as a place for investment,” said Roman Heidrich, a director of residential valuation at real-estate agency JLL Germany. “Most likely, it could lead to an immediate halt to most investment and modernization plans.”

Supporters argue that the government is better suited to keep a lid on rising housing costs. Joanna Kusiak, a spokeswoman for the referendum organizers, said the vote puts pressure on politicians to carry out the measure.

“We Berliners have decided that no one must be allowed to speculate with our apartments,” she said in a statement.

Since the fall of the Berlin Wall more than 30 years ago, the once-divided capital has morphed from frontier city in the former communist east into a thriving metropolis attracting companies that offer high-paying jobs.

Rents have shot up over the years, complicating the lives of many in a city where 84% of the population are tenants. Berlin has estimated that the city needs 20,000 new homes annually to accommodate the growing population.

With turnout running at 72%, the vote coincided with elections for Germany’s parliament and Berlin’s city government. Whether the Social Democrats or the Green party appoints the next mayor in the country’s most populous city, either party will struggle to ignore the voices of hundreds of thousands of voters.

Paying for a transfer of ownership is also a contentious issue. Proponents of the referendum argue that the government can shoulder the burden of reimbursing real-estate companies. Opponents say the cost to implement this measure would be vast — between 29 billion euros ($34 billion) and 39 billion euros, funds that should be made available for other projects.

Berlin has had mixed results trying to put a lid on rental prices. The city government enforced a rent cap a few years ago, only to see a court overturn the decision again. Another referendum, which sought to keep the popular but comparatively tiny Tegel airport open, also failed to change the ultimate outcome. While Berliners voted in favor of the move, the airfield has since closed.