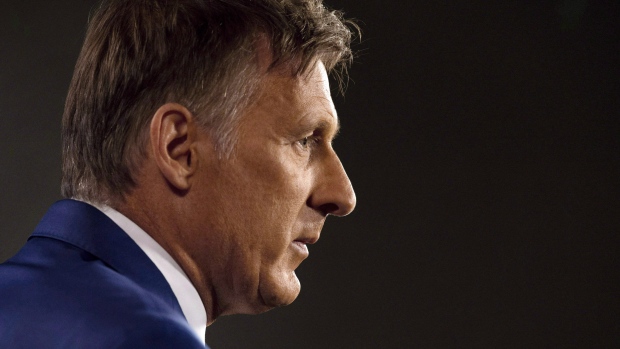 Maxime Bernier announces he will leave the Conservative party during a news conference in Ottawa on Thursday August 23, 2018. , THE CANADIAN PRESS/Adrian Wyld

A maverick Canadian lawmaker who almost won the Conservative leadership launched his own populist party, raising the threat of vote-splitting on the right that could be a boon for Justin Trudeau.

Maxime Bernier, who quit the Conservative Party last month, announced the creation of the People’s Party of Canada at a press conference Friday in Ottawa. He called for smaller government, more private health care, fewer tax brackets, streamlined dairy rules and only welcoming immigrants that “share our values” -- adding that the party would field a full slate of candidates in next October’s federal election.

The impact isn’t entirely clear, but it likely bodes well for Trudeau’s Liberal Party, which governed from 1993 to 2006 in large part because of a split of Canada’s conservative vote between two similar-minded parties. Bernier finished a close second last year in the race to lead the united Conservative Party, sparred with winner Andrew Scheer and eventually quit.

Bernier, known by the nickname Mad Max, was foreign minister in the government of Stephen Harper, who united Canada’s conservatives and governed from 2006 to 2015. Bernier left his cabinet post after a scandal in which he left sensitive documents at the apartment of an ex-girlfriend with ties to motorcycle gangs.

Harper has sided firmly with Scheer. “It is clear that Max never accepted the result of the leadership vote and seeks only to divide Conservatives,” the former prime minister tweeted last month, calling for conservatives to rally behind Scheer.

Canada’s parliamentary system has three main parties: Trudeau’s centrist Liberals, the left-leaning New Democratic Party and the right-leaning Conservatives. Only the Liberals and Conservatives have governed federally. The Bloc Quebecois, a separatist party in Bernier’s province of Quebec, and the Green Party have also won federal districts.

A poll by Abacus Data last month found Bernier would hurt the Conservatives most -- reducing their support by 6 per centage points, compared to 3 for the Liberals and 2 for the NDP. The poll found Bernier’s then-unnamed party had 13 per cent support, fourth place among the pack.

Canadian politics has seen shades of populism in recent months. The frontrunner in the current Quebec election campaign is calling for less immigration, while Doug Ford won power in Ontario in June with a “For the People” slogan. Immigration and the flow of asylum seekers crossing the border from the U.S. have also become a political issue for Trudeau since Donald Trump’s election.

Bernier rejected a question of whether he sees himself like the U.S. president. “Maybe what I’m doing with the social media, that can be a comparison, but I think that’s it,” he said.

Pressed on immigration, Bernier attempted to explain his party’s position by saying he would reject immigrants that believe gay people should be executed by hanging. While arguing people who want to eliminate immigration outright are “not welcome in our party,” he said immigrants who “don’t share our values -- they are not welcome.”

Rejecting Trudeau’s championing of multiculturalism, Bernier added that Canada’s government shouldn’t “promote more diversity” and instead “promote what unites us.”