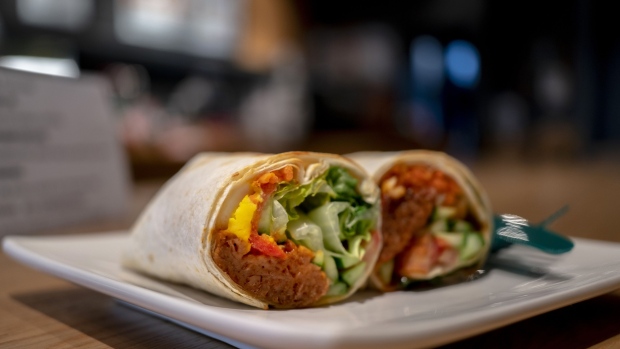 China is driving growth in Asia’s plant-based protein market as health-conscious consumers embrace an array of new products, according to Archer-Daniels-Midland Co., one of the world’s biggest agricultural traders.

The uptake of locally-sourced plant-based protein has generally been faster in China than in other parts of the world and the industry there is moving quickly beyond burger analogues, according to ADM Asia Pacific President Leo Liu. Alternatives to shrimp and shellfish, plant-based cheeses and ready-to-eat protein snacks are all becoming more popular, he said.

“Awareness and interest in plant-based proteins as an alternative to meat is growing,” the Shanghai-based Liu said in an interview. Chinese people are experimenting with plant-based options as they look for protein-rich diets that are sustainable, convenient and meet food safety standards, he said.

ADM -- one of the big four agricultural traders along with Cargill Inc., Bunge Ltd., and Louis Dreyfus Co. -- already has extensive operations throughout China and will be investing more in alternative proteins there, Liu said. The company forecasts China’s plant-based protein market will grow to US$14.5 billion in 2025 from under US$10 billion in 2018.

The rising interest in plant-based protein dovetails with Beijing’s increasing focus on the environment and food security. Self-sufficiency featured strongly in China’s latest five-year plan that came after the country’s hog herd had been devastated by African swine fever and the trade war with the U.S. as well as the Covid-19 pandemic highlighted the fragility of global supply chains.

Diversifying protein intake to plant-based sources could help China cope with future meat shortages, Bloomberg Intelligence analysts Alvin Tai and Ashley Kim said in a report released in February. Reducing meat consumption is also part of China’s strategy to reduce its carbon intensity by more than 65 per cent from 2005 levels by 2030, they said.

The growing number of Chinese flexitarians -- people who are mostly vegetarian but occasionally eat meat or fish -- is helping to spur alternative food startups across the country, Liu said. “Consumers are moving away from an obsession with calorie counts to focusing on food’s intrinsic value.”

Many China-based companies will continue to increase production capabilities as the popularity of plant-based meat continues to rise, Fitch Solutions said in a March 31 note.

A bevy of global food titans are also seeking to get in on the action. Cargill started a plant-based meat products brand called PlantEver that’s sold directly to Chinese consumers last year, while industry pioneer Beyond Meat Inc. opened its first manufacturing facility outside the U.S. near Shanghai this week. Livekindly Collective, a group of alternative protein brands steered by a former Unilever Plc executive, also has plans to expand in China.

ADM, which says it’s now the largest plant-based protein provider in the world, has for years been diversifying away from trading bulk crops and into higher-margin food manufacturing. The company expects its nutrition unit, which contains its plant-based protein business, to become as large or even larger than its legacy business of buying and shipping crops by 2050.

One of the biggest potential hurdles for the industry in China is competition from long-existing and cheaper soy-based products such as tofu, Liu said.