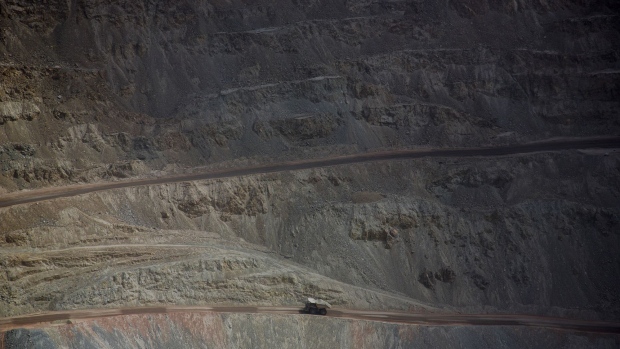 A truck transports minerals inside the Codelco Chuquicamata open pit copper mine near Calama, Chile, on Thursday, Aug. 2, 2018. Protests at the Chuquicamata copper mine in late July were the first labor disruptions in Chile this year, and happened amid calls for a strike from the union at the world's largest mine, BHP Billiton Ltd.'s Escondida. Photographer: Cristobal Olivares/Bloomberg , Bloomberg

(Bloomberg) -- Chilean regulatory uncertainties that have held up some investments in the biggest copper-producing nation are dissipating, according to BHP Group, the world’s top mining company.

“The uncertainties are easing,” he said in an interview from the Perumin conference in Arequipa, Peru. “We’re starting to see a bit more moderated conversations around the constitution in terms of what that’s going to look like one way or the other.”

BHP, which operates the world’s biggest copper mine in Chile, has dangled $10 billion to develop more resources in the country if those uncertainties are finally resolved. Huge investments are needed to help boost global supply at a time when demand for the wiring metal is set to rise as the world turns away from fossil fuels.

While it’s up to Chileans to decide whether they want a regulatory environment that remains competitive with other mining nations, people do recognize the importance of a stable economy, Udd said.

“The conversations I’ve had would suggest that there is a sensation that the reality is that Chile has an important role to play in the world and some of the changes that we see going forward probably won’t be as extreme as we’ve seen in the past,” he said.

Chile’s push for a bigger share of mining profit to address inequalities are part of the copper market’s growing supply-side challenges. Deposits around the world are getting trickier and pricier to find and develop, while there’s heightened scrutiny of environmental and social issues. Surging inflation, rising interest rates and global recession fears that have brought down commodity prices in recent months are adding to investment barriers.

Inflation is washing through mining projects, “to the point that I think that will create another obstacle in terms of how people think about investing for the next period of time,” Udd said.

“Organic growth is challenged in the current environment,” he said. “We for a second though are not backing off of exploration, nor are we backing off from early-stage entries or innovation. In fact, this sort of environment creates a possibility in terms of what can you unlock with what you’ve got.”

These days, BHP is focusing more on technologies such as leaching that can boost output without incurring huge upfront costs. It’s also taking a “more proactive stance” on early-stage entry, Udd said.

The company’s team in Toronto continues to scour for deal opportunities in nickel, although that hunt isn’t restricted to early-stage targets. “This is not an ‘or’ conversation, this is an ‘and’ conversation,” he said. “If it adds value, we will pursue it.”

With regards to BHP’s interest in Sydney-listed OZ Minerals Ltd., Udd said a non-binding indicative offer has been made. “If Oz would like to talk to us, we’re very receptive to that.”

In the case of its smallest mine in Chile, Cerro Colorado, BHP is exploring alternatives to continue operating beyond 2023, when current permits expire. A solution probably would include the use of seawater, he said. “That’s a process and studies we’re working through at this point.”

Udd wouldn’t be drawn in to making copper-price predictions in such a volatile market. Like most in the industry, he offered an upbeat outlook for the medium and longer term as decarbonization drives demand for the wiring metal and the industry struggles to keep pace. But with the current slowdown and some new supply coming on stream, near-term prospects are far less favorable, although BHP is still relatively bullish on China.

“It’s a volatile world and probably will continue to be for at least the next couple of years,” he said “We just need to adjust to that, recognizing though that there’s a longer term goal that we can be working on.”