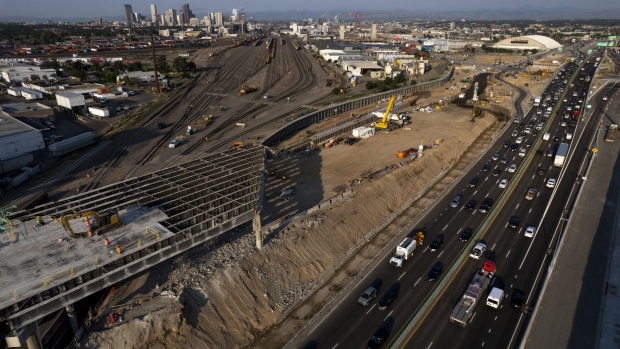 Vehicles travel along Interstate 70 past a construction site for the Central 70 project in Denver, Colorado, U.S., on Thursday, July 15, 2021. Lawmakers have been battling for months to move ahead with an infrastructure package to improve the nation's ailing roads, bridges and transit systems. Photographer: Michael Ciaglo/Bloomberg , Bloomberg

The “Build Back Better World” program will look to counter Chinese influence by offering funding for projects with higher labor standards, a focus on climate considerations and helping disadvantaged groups like female entrepreneurs. It takes its name from President Joe Biden’s campaign slogan and was launched by the leaders of the world’s richest democracies at the G-7 summit earlier this year.

Since then, White House officials including deputy national security adviser Daleep Singh have visited nations in South America and Africa for discussions on potential launch projects, with an additional trip to Asia scheduled in the coming weeks.

In each of the five nations visited so far -- Senegal, Ghana, Colombia, Ecuador and Panama -- U.S. officials have identified about 10 projects that could launch in the coming months as part of the initiative. That list, in addition to any projects discussed in Asia, will be winnowed to a small group of high-profile projects set to receive early funding, the administration official said.

The U.S. hopes the projects will both demonstrate the viability of the Build Back Better World concept and allow participating countries to better evaluate how successfully the financing effort is working, according to the official.

The White House hopes the initiative can help democratic nations counter Beijing’s massive trillion-dollar project to finance infrastructure projects across the developing world. Biden has said he hopes that by involving the private sector, insisting on additional transparency, and offering equity financing instead of the onerous debt financing required by the Chinese, the U.S. and other countries can offer a preferable development path.