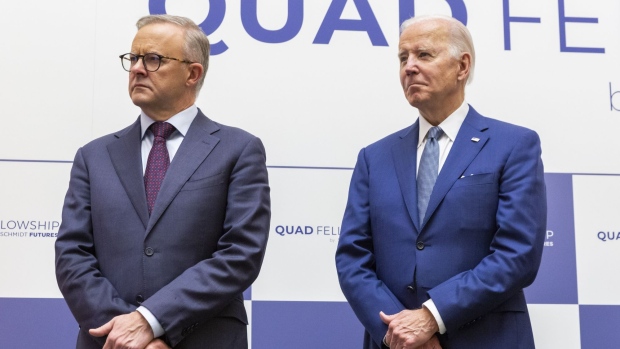 Anthony Albanese, Australia's prime minister, left, and US President Joe Biden attend the Japan-U.S.-Australia-India Fellowship founding celebration event in Tokyo, Japan, on Tuesday, May 24, 2022. A meeting of the leaders of the four-nation security grouping, known as the Quad, was held on the final day of Biden’s first trip to Asia since taking office. , Bloomberg

President Joe Biden on Tuesday welcomed Anthony Albanese to a regional leaders summit in Tokyo, joking that he’d understand if the newly elected Australian Prime Minister dozed off during the session.

“You got sworn in, got on the plane: If you fall asleep while you’re here, it’s OK. Because I don’t know how you’re doing it,” he said and chuckled. “It is really quite extraordinary. Just getting off the campaign trail as well.”

Albanese was sworn in Monday and quickly flew to Tokyo for summit meetings Tuesday with Biden and other leaders of the Quad security partnership, even as vote counting continued to determine if his party would hold a majority.

Albanese assured fellow leaders that the Australian government’s priorities were aligned with the Quad, promising to “take ambitious action on climate change,” including setting a target to reduce emissions by 43% by 2030.

Biden on Sunday called Albanese to congratulate him on his win, praising his “early commitment” to the US-Australia alliance and expressing his desire to make it stronger, the White House said in a statement.

Biden and Albanese will hold a bilateral meeting later Tuesday.

Australia was one of a dozen Indo-Pacific nations to join a new US economic initiative designed to counter China’s influence in the region. The nations involved in the Indo-Pacific Economic Framework comprise roughly 40% of global gross domestic product, but questions have been raised about its effectiveness.

The agreement doesn’t include tariff reductions to encourage greater access to the US market, unlike the Trans-Pacific Partnership from which former President Donald Trump withdrew, and it remains unclear which parts of it are binding.

“The relationship with China will remain a difficult one,” Albanese said over the weekend when asked how he would handle Beijing as prime minister. “I said that before the election. That has not changed. It is China that has changed, not Australia. And Australia should always stand up for our values.”

China is Australia’s largest two-way trading partner, accounting for 31% of its trade with the entire world, according to the Australian government’s Department of Foreign Affairs and Trade.