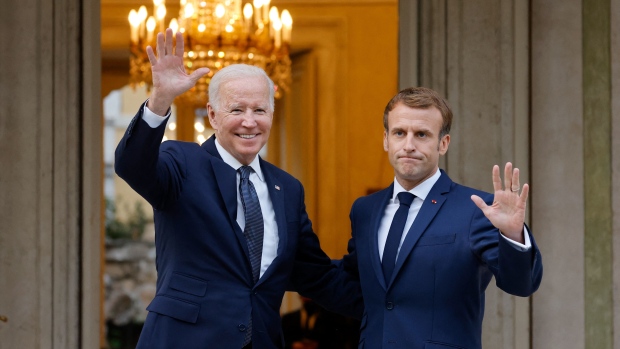 (Bloomberg) -- Joe Biden and Emmanuel Macron will dine on lobster, caviar and an Oregon cheese named the best in the world while listening to Grammy-winner Jon Batiste at the US president’s first state dinner on Thursday.

Batiste, one of the nation’s most award-winning musicians, will perform with his father, Michael Batiste, according to first lady Jill Biden’s office. The menu will include a cheese course highlighted by Oregon’s Rogue River Blue, the first US cheese to ever win the World Cheese Awards, according to White House executive chef Cristeta Comerford.

Between 300 and 400 guests will join Biden, Macron and their wives in a large heated tent on the South Lawn of the White House -- one of the larger guest lists for a state dinner in recent history, according to Colleen Shogan, a historian at the White House Historical Association.

“We hope that the French citizens everywhere feel the warmth of our welcome. May our friendship grow stronger, our ties deeper and our futures brighter as we deepen our partnership,” Jill Biden told reporters on Wednesday.

“Our hope is that the end result will be a night that balances the beauty of our friendship with the seriousness of purpose,” she added.

The state dinner, considered one of the most lavish White House traditions and a show of respect to visiting heads of state, will cap a busy schedule for the Macrons, who arrived in Washington late Tuesday.

The menu, though, drew protest from Oceana, a conservation advocacy group, which pointed out that the Monterey Bay Aquarium’s Seafood Watch and the Marine Stewardship Council have encouraged consumers to avoid Maine lobster because of the threat fishing practices have on endangered North Atlantic right whales.

“Smarter choices would include a menu with wild Gulf shrimp or Atlantic scallops from U.S. fisheries that have tackled endangered species problems head-on and developed effective ways to minimize risk,” Oceana Campaign Director Gib Brogan said in a statement on Wednesday. “The lobster on the White House menu comes from a fishery with well-documented risks to the remaining 340 critically endangered North Atlantic right whales that are often entangled in fishing gear.”

Whole Foods has said it plans to stop buying Maine lobster, because of environmental concerns.

The first lady’s office did not immediately respond to a request for comment on Oceana’s statement.

Brigitte Macron also paid a visit to the Duke Ellington School of the Arts where she met with students.

Later Wednesday, the Macrons attended a reception in honor of the French community at their country’s embassy. On Thursday, the two presidents will hold an official meeting and a joint news conference.

Brigitte Macron is scheduled to stop at the Planet Word museum in Washington with Jill Biden, and later will visit the National Museum of African American History and Culture.

On Friday, the Macrons head to New Orleans, a city heavily influenced by French culture.

France is one of the most frequently honored countries at state dinners, according to Shogan. Macron was also the guest for former President Donald Trump’s first state dinner in April 2018, where Trump made a toast to the “nearly two-and-a-half centuries of friendship” between the US and its oldest ally.

(Updates with comments from Oceana, starting in seventh paragraph.)