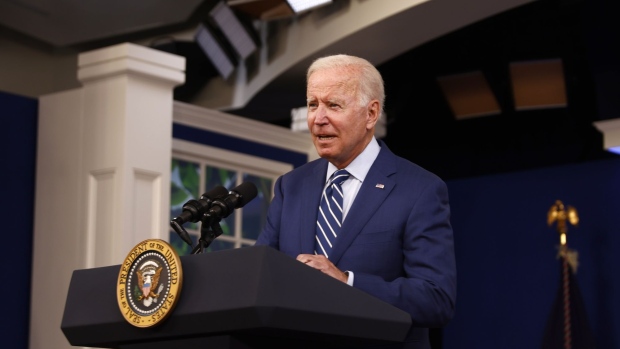 U.S. President Joe Biden speaks before receiving a booster shot of the Pfizer-BioNTech Covid-19 vaccine in the Eisenhower Executive Office Building in Washington, D.C., U.S., on Monday, Sept. 27, 2021. Biden meets guidelines issued last week by the Food and Drug Administration and the Centers for Disease Control and Prevention that those over age 65 get a third vaccination. , Bloomberg

(Bloomberg) -- House Speaker Nancy Pelosi and the White House are working to close a split in the party that threatens to blow up President Joe Biden’s economic agenda.

Pelosi and Biden have been calling lawmakers ahead of a closed door meeting of House Democrats Monday afternoon in an attempt to bridge differences between moderates and progressives that are stalling votes on a bipartisan infrastructure bill with $550 billion in new spending and a much larger tax and spending measure that carries much of the rest of Biden’s domestic plans.

“I think these are going to go well, I think we’re going to get it done,” Biden said Monday at the White House. “But I have meetings tonight, tomorrow, and for the next little bit.”

Biden’s direct involvement is a sign of the high stakes for Democratic leaders and the debate consuming Congress and the White House just days before a possible Oct. 1 government shutdown and a payments default by the Treasury later in October if the federal debt limit isn’t raised. The Senate is set to take a procedural vote on House-passed legislation to keep the government funded and suspend the debt ceiling, but Republicans are expected to block it and Democratic leaders haven’t publicly revealed a strategy for an alternative.

For now, Pelosi has scheduled a Thursday vote on the infrastructure bill while she, Biden and Senate Majority Leader Chuck Schumer work to find some manner of agreement between the party’s two factions on taxes and spending for the other piece of their agenda.

Pelosi scheduled the infrastructure vote under pressure from moderates eager to get the bipartisan bill, which has already passed the Senate, enacted. But progressives -- whose votes are likely vital -- are insisting on progress first on the bigger social-spending bill.

Pelosi pushed the infrastructure vote to Thursday from her original promise of a Monday vote to give time for negotiations. The problem for Democrats is not the substance of the infrastructure bill, which has broad support, but the factional battle for influence over the second, larger bill, which the party is pursuing on its own through a process known as reconciliation.

One moderate Democratic lawmaker said further delays on the infrastructure bill would threaten the entire agenda. The lawmaker, who spoke on condition of anonymity because discussion are private, said there had been some progress in talks to advance the reconciliation bill.

That would involve assurances about what level of spending would be accepted by moderate Democrats in the Senate, primarily Joe Manchin of West Virginia and Kyrsten Sinema of Arizona.

“We’re just negotiating against ourselves” until it’s clear what Manchin’s and Sinema’s positions are, said another moderate, House Democrat Ann Kuster of New Hampshire.

Manchin and Sinema have said that they won’t back the House’s current $3.5 trillion draft. Democratic Representative Jim Costa said on Friday that Manchin has told him he is comfortable with $1.5 trillion in spending and that a top-line level needs to be figured out quickly.

Pelosi said that it “seems self-evident” that the bigger measure will be less than the $3.5 trillion allowed in the budget resolution that Democrats are working with.

“Obviously with negotiations there will have to be some changes in that, the sooner the better, so that we can build our consensus to go forward,” she said.

Faced with continued intra-party feuds over the package’s size and contents, Schumer and Pelosi announced last week they had a “framework” of tax options to pay for expanding social programs. But other Democrats said they haven’t seen it and it appears little more than a compilation of options previously floated by leading Democrats.

Outside of the revenue “framework,” there have been few signs of progress in recent days on a host of matters including a drug-pricing plan and measures to address climate change. On one of the sticking points, Representative Tom Suozzi said a detailed, final agreement to expand the federal deduction for state and local taxes could be reached this week

As for the infrastructure bill, with Republicans estimating it will get fewer than 20 GOP votes, it appears on track to be voted down if progressive Democrats withhold support.

“I don’t believe there will be a vote,” Representative Pramila Jayapal, head of the Congressional Progressive Caucus, said Sunday on CNN’s “State of the Union.” “The votes aren’t there.”

As Pelosi works to navigate demands that have held up the two packages, the Senate will enter the week consumed with the uncertain task of clearing legislation that would keep the government operating past Sept. 30 and determining when and how to raise the nation’s debt ceiling.

The House last week narrowly approved a bill that would suspend the U.S. debt ceiling until Dec. 16, 2022, and continue funding for government operations until Dec. 3. But in the 50-50 Senate, Republicans say they’ll unite to oppose including the debt limit hike.

Schumer has set up a vote for 5:30 p.m. Monday on the House-passed measure, a move that is little more than a ploy to put Republicans on record in a game of chicken between leaders in each party.