President Joe Biden presented a US$2.25 trillion U.S. infrastructure plan on Wednesday, setting the stage for a drawn-out battle over his second big economic program after his pandemic-relief package’s relatively smooth sail through Congress.

“We’re going to bring everybody along,” Biden promised in a speech in Pittsburgh, saying that past economic growth had left out large swathes of American society. “We all do better when we all do well.”

The “American Jobs Plan,” as the president dubbed it, lays out an eight-year program that includes US$620 billion for transportation and US$650 billion for initiatives such as cleaner water and high-speed broadband. Biden’s plan would also allocate US$580 billion to American manufacturing -- which would include US$180 billion for the biggest non-defense research and development program on record and US$400 billion toward care for the elderly and disabled.

“It’s time to build our economy from the middle out,” Biden said, saying his plan “rewards work, not just wealth.”

He said he was open to alternative ideas from lawmakers, including Republicans, but was determined to push through a program he called vital to buttress America’s flagging competitiveness against other nations led by China.

“The rest of the world is closing in and closing in fast,” he warned.

But Biden will face fierce opposition from GOP lawmakers, especially over his proposal to pay for the package with tax increases. The president wants to raise the corporate income tax to 28 per cent and set a 21 per cent minimum levy on global corporate earnings. While the spending would be temporary, the tax hikes would be permanent -- at least until new legislation is enacted to change them.

The plan is also focused on addressing inequalities, and what the administration vows will be the creation of millions of jobs -- many of them in unions. 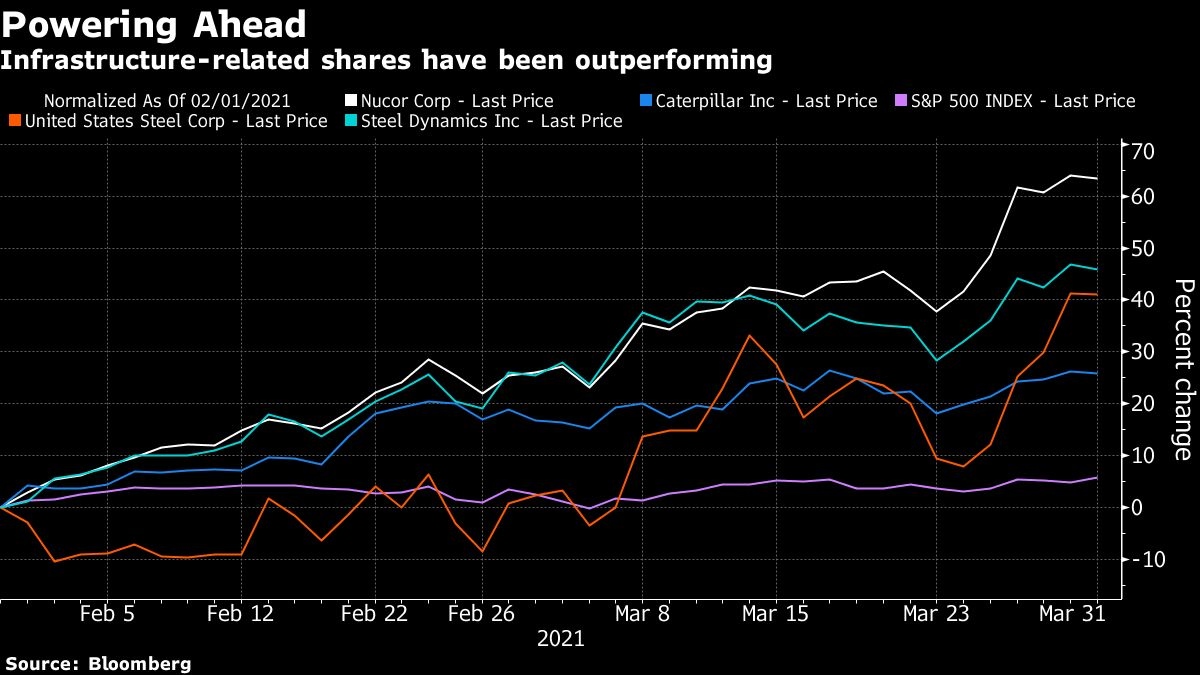 Biden spoke at a carpenter’s training center in Pittsburgh and was introduced by a union member. He outlined the new plan in the same city where he held his first campaign rally nearly two years ago -- at a Teamsters hall with a pledge to fight for middle-class Americans.

Biden’s plan will prove far more complex to enact than the US$1.9 trillion pandemic-relief bill the president signed into law earlier this month. Republicans are staunchly opposed to tax increases, and the breadth of measures will invite partisan battles as well as discord between moderate and progressive Democrats.

“It’s like a Trojan Horse that’s called infrastructure,” Senate Minority Leader Mitch McConnell said Wednesday. “But inside the Trojan Horse is going to be more borrowed money and massive tax increases on all of the productive parts of our economy.”

Biden said he would bring Republicans into the Oval Office and was open to “good faith negotiations” with lawmakers who want to proceed with the major infrastructure plan. He said an outstanding question in international affairs is now whether “democracies can deliver for their people” at a time when autocracies are driving forward.

The bipartisan outreach began with inviting Republicans from relevant committees to briefings with Brian Deese, the National Economic Council director.

But an infrastructure-spending bill doesn’t necessarily need Republican support to become law. Congressional Democrats could choose to fit many of the president’s proposals into one or more budget reconciliation bills, which require only a simple majority vote in the Senate -- though some elements may face parliamentary-rule challenges for inclusion in such legislation.

House Speaker Nancy Pelosi told her caucus members Monday that she aims to move the infrastructure bill through her chamber by July 4, though it could slip to later that month, according to a person familiar with the matter. That timeline could allow for the Senate to pass the final version before Congress’s month-long August recess.

A key theme of the program is bolstering U.S. competitiveness against China. There’s US$50 billion earmarked for domestic semiconductor manufacturing, and $40 billion more in upgrading research capacity in laboratories across the nation.

Biden invoked the American space program of the 1960s in touting his plans for a giant expansion in federal funding for science and technology. New food-safety and digital controls for plants and automobiles were just some of the many commercial applications of NASA programs, he said.

Climate change is also a major target. The proposed transportation fundingspecifically directs US$174 billion to electric vehicles, including sale rebates and tax incentives for consumers to buy American-made cars.

What Biden laid out in Pittsburgh is the first part of his long-term economic program, and he plans to unveil a second round of initiatives in mid-April. Those will focus on “helping families with challenges like health care costs, child care, and education,” the White House said. Biden called it the “American Family Plan.”

The next package is set to feature tax hikes on wealthy Americans. Biden repeated in Wednesday’s speech that “nobody” earning less than US$400,000 would face higher tax bills as a result of his proposals, however.

Companies reacted with a range of responses. The U.S. Chamber of Commerce, Business Roundtable, and other business lobbies strongly opposed raising the corporate income tax rate. But some companies hailed the planned investments.

“We support the commitment of the American Jobs Plan to build the modern, climate-resistant infrastructure needed for a clean-energy future,” said Katy Brasser, a spokeswoman for Eaton Corp., which makes components and software for power management, in an emailed statement.

Economists have largely held off from projecting the economic impact for now.

“Given the uncertain path to implementation, and the lack of detail on Part 2 of Biden’s agenda, we have yet to incorporate it into our GDP outlook,” Jefferies economists Aneta Markowska and Thomas Simons wrote in a note Wednesday. “But, taken at face value, the plan creates roughly 0.5-1.0 percentage point of upside to our current 2022 forecast of 5.2 per cent.”

--With assistance from Thomas Black.