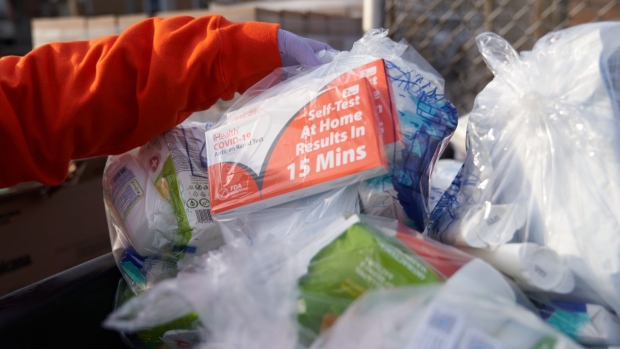 Volunteers handout free Covid-19 at-home test kits with groceries at a food distribution site in Chelsea, Massachusetts, U.S., on Tuesday, Dec. 21, 2021. The Omicron variant has swiftly overtaken Delta as the dominant form of the coronavirus in Massachusetts, according to a new analysis by scientists at The Broad Institute of MIT and Harvard, now accounting for the majority of the cases here. Photographer: Allison Dinner/Bloomberg , Bloomberg

(Bloomberg) -- President Joe Biden plans to order an additional 500 million rapid Covid tests to send to Americans, doubling the number the administration is already in the process of acquiring, as demand outstrips supply.

The new order is designed to ensure the U.S. has enough to meet future needs, the official said. Biden plans to discuss the additional order during remarks at the White House on Thursday.

The announcement comes as the U.S. is facing a shortage of tests and long lines at testing centers across the country, the result of a spike in cases from the omicron variant. Retailers, schools, and local governments are having trouble keeping at-home kits in stock.

Biden in December announced his administration plans to send the 500 million already being ordered at no charge to Americans who request them.

The initial order is set to begin shipping this month, but the administration has not said how long it will take for it to receive all those tests and make them available.

Tom Inglesby, Biden’s testing coordinator, said this week that the government will use its purchasing power to to keep test production high, even as demand recedes, as a way to prevent future shortfalls.

The administration is tapping existing supplies of test kits stored in warehouses for the 500 million tests he promised last month. The suppliers has a stockpile of unused Covid-19 tests, Dawn O’Connell, Health and Human Services assistant secretary for preparedness and response, told a Senate panel Tuesday.

The White House will release details on how to order them by the end of this week, White House Press Secretary Jen Psaki said Wednesday, adding that Biden’s team will finish signing deals to buy the tests within two weeks.

Biden also promised earlier this week that he would supply 5 million free rapid tests per month to schools, separately from the millions he’ll provide to the general public.

(Updates with shortage in third paragraph.)