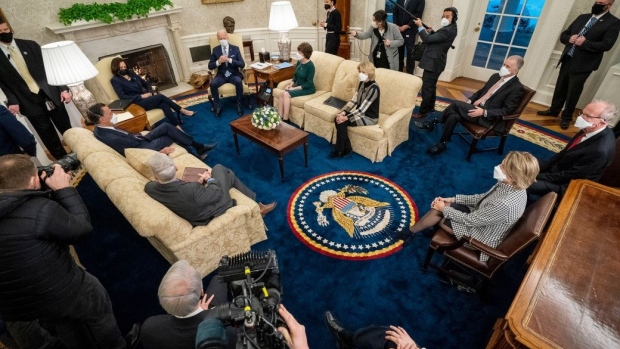 The U.S. Capitol building at dawn in Washington, D.C., U.S., on Tuesday, Feb. 9, 2021. The U.S. Senate is set to begin its second impeachment trial of former President Donald Trump for incitement of insurrection following the events at the U.S. Capitol on January 6. Photographer: Stefani Reynolds/Bloomberg , Bloomberg

(Bloomberg) -- Democrats begin the final push for President Joe Biden’s $1.9 trillion stimulus bill this week, dropping any pretense of bipartisanship to quickly pass the package before an earlier round of benefits runs out.

This will be the first real test for Democrats’ full control of government since former President Donald Trump’s impeachment trial, with implications for the rest of Biden’s agenda and the pandemic-battered economy. The House plans to vote as soon as Friday on Democrats’ stimulus package, setting up a Senate vote as soon as next week.

Resolving the final hurdles, especially disagreement among Senate Democrats about a provision phasing in a $15 per hour federal minimum wage, would clear the way for Biden to give his first address to a joint session of Congress in March outlining his next policy goals, including a multi-trillion dollar infrastructure bill.

“The Senate is on track to send a robust $1.9 trillion package to the president’s desk before the March 14 expiration of unemployment insurance benefits” from the last round of stimulus, Senate Majority Leader Chuck Schumer said in a Friday letter to colleagues. “We will meet this deadline.”

In public, the focus will be on the House this week with a Budget Committee vote Monday and a floor vote on the bill as soon as Friday. The content of the bill is mostly locked in -- the Budget Committee isn’t even allowed to make substantive changes -- and there’s no sign of a rebellion by the few remaining Democratic deficit hawks imperiling the bill on the floor.

The real action will be behind closed doors in the Senate, where Democratic leaders are hammering out the changes needed to get all 50 Senate Democrats and independents on board.

Biden initially sought some GOP support for his stimulus proposal, which includes $1,400 checks for individuals making less than $75,000, resources for vaccine distribution, funds for schools to reopen, and $400 per week in supplemental unemployment insurance. But Republicans said the plan was too expensive, coming after last year’s $2 trillion and $900 billion virus-relief packages enacted in March and late December, respectively.

Biden on Friday called on Congress to pass his plan during a tour of a Michigan Pfizer plant that’s producing the coronavirus vaccine. He called on Republicans in Congress to listen to their constituents and vote for the bill, citing polls saying a majority of Americans support the measure.

But most Republicans are expected to oppose the bill, with House Minority Whip Steve Scalise telling his GOP conference to vote against it.

Speaking Sunday on ABC’s “This Week,” Scalise said it makes no sense to pass the large package Biden when there are unspent funds from the last relief bill and growing concerns about the nation’s debt.

“The money is still sitting in a bank account, and we’re going to spend $1.9 trillion of additional spending to bail out failed states, to raise the minimum wage? What does that have to do with Covid? It should be focused on helping families and small businesses who are struggling, not bankrupting our children,” Scalise said.

Democrats have said they didn’t have time to negotiate with Republicans. The current federal unemployment supplement of $300 per week expires March 14, though some jobless individuals will continue to receive benefits until April 11. Missing this deadline would cut off assistance for more than 10 million people.

With that in mind, Democrats are using a fast-track budget procedure to enact the bill without needing at least 10 Republicans. That means, though, the bill must comply with instructions in the recently adopted fiscal 2021 budget resolution, the total cost can’t exceed the $1.9 trillion, and all provisions must be fiscal in nature.

The Congressional Budget Office also said on Saturday that the bill slightly exceeds $1.9 trillion, which will force House Democrats to make trims before the bill can pass the Senate.

The main provision that might not be eligible is the $15 minimum wage. Senate Budget Chairman Bernie Sanders argues that the measure qualifies as fiscal since the non-partisan CBO found it to increase deficits by $54 billion over ten years. Opponents say the budget impact is “merely incidental” compared to the overall labor market impact. The wage provision may also violate Senate rules against adding to deficits after 10 years, and therefore would require offsetting savings or revenue to qualify.

Senate Parliamentarian Elizabeth MacDonough will hear arguments by lawyers for the Democratic majority and Republican minority before ruling. Although a simple Senate majority can overrule her decision, West Virginia Senator Joe Manchin has said he won’t vote against her recommendation, denying Democrats the 50 votes they would need with Vice President Kamala Harris‘s tie-breaking vote.

Once the parliamentarian sets the parameters of what could be allowed in the bill, it will be up to Democrats to decide what provisions to include in the Senate version. Democratic senators Manchin, Kyrsten Sinema of Arizona and Jon Tester of Montana have all expressed doubts about the minimum wage increase. Manchin has also tried to lower the $75,000 threshold for phasing out the $1,400 stimulus checks, but he faced opposition from progressives and from the Biden administration.

Meanwhile, Senate Finance Committee Chairman Ron Wyden has said he wants to extend expanded unemployment benefits for six months, rather than the five months in the House bill, and would like the $400 per week supplemental unemployment insurance be set instead at $600.

Democrats plan to skip formal committee work on the bill, which means their internal talks may produce a substitute amendment for a vote on Senate floor. Once the Senate approves the changes, the House plans to vote again on the bill before the March 14 deadline.