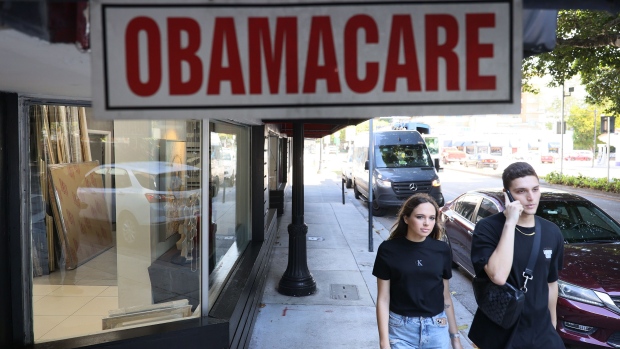 (Bloomberg) -- President Joe Biden said 2.8 million Americans signed up for health insurance through Obamacare exchanges during a special enrollment period started early in his presidency, pushing the number of Americans who receive coverage under the Affordable Care Act to an all-time high.

The record enrollments came after the president in February announced he would allow Americans who missed the deadline to purchase health care coverage a second chance, citing the coronavirus pandemic. An emergency relief package passed by Congress in April then increased federal subsidies for Americans buying insurance on state-run exchanges, leading to lower prices and a surge of enrollments before the special period ended last month.

Biden said the increasing numbers of Americans with health insurance was “encouraging” but argued Congress needed to further extend the expanded tax credits in a statement Wednesday.

“I urge Congress to act quickly to deliver for the American people – to keep up the vital work of expanding access and lowering health care costs across the board, and to continue building on the strong foundation of the Affordable Care Act,” Biden said.

Enhanced subsidies and broader Medicare benefits are among the proposals being considered by Democrats currently negotiating a reconciliation bill of Biden’s domestic spending priorities that could total as much as $3.5 trillion. But the White House and congressional leaders will need to navigate skepticism among moderate Democrats -- including Senator Joe Manchin of West Virginia -- who have said they want to scale back the cost of that legislation.

Americans will again be able to buy insurance from state marketplaces starting Nov. 1, though those who lose employer-offered coverage may qualify to do so sooner.