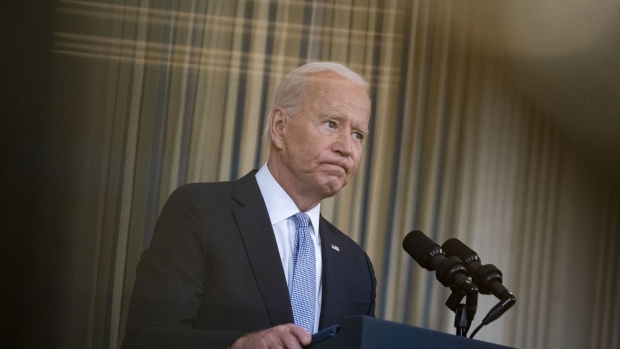 U.S. President Joe Biden pauses while speaking in the State Dining Room of the White House in Washington, D.C., U.S., on Friday, Sept. 24, 2021. The U.S. will begin giving Covid-19 booster shots to millions of Americans today, a watershed moment in the nation's battle against the pandemic that officials hope will beat back another brutal winter wave of infections. , Bloomberg

(Bloomberg) -- President Joe Biden hadn’t heard Germany’s election results when he returned to Washington from his weekend retreat on Sunday, but he complimented the projected winner.

“I’ll be darned,” Biden said when a reporter told him that the Social Democrats were ahead in the election, which will determine who replaces Angela Merkel as German chancellor. “They’re solid,” he said.

Biden spent the weekend at Camp David ahead of a crucial week for his economic agenda in Congress. He and his team held conversations with lawmakers over the weekend about the path forward to pass the two bills, according to a White House official.

After telling reporters he’s optimistic about the week ahead in domestic policy, Biden took a moment to react to the results of Sunday’s vote in Germany. “I didn’t hear them” while at Camp David, he said.