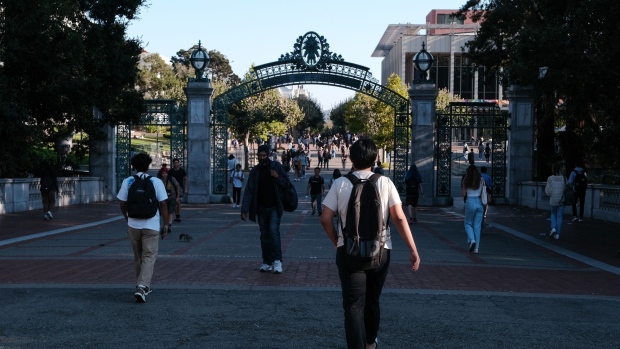 Students pass through Sather Gate on the University of California, Berkeley campus in Berkeley, California, US, on Tuesday, Aug. 30, 2022. College students returning to campus this fall will find their dining halls experimenting with everything from fewer salad dressings to "plant-powered" Mondays as schools look for ways to adapt to soaring inflation. , Bloomberg

(Bloomberg) -- The US Department of Education is slated to launch its application for student loan forgiveness later this month, but a growing list of legal challenges could threaten the program’s rollout.

Five separate lawsuits in courts across the country seek to block the plan, arguing that the president overstepped his executive power by authorizing such large-scale debt relief without congressional approval.

Biden throughout his presidency has faced skepticism from trial judges and the conservative-majority Supreme Court for stretching his authority, including when the high court blocked the president’s vaccine-or-test rule for private-sector workers and his pause on rental property evictions during the pandemic.

His student loan relief plan, announced in late August, will forgive as much as $20,000 in federal loans for certain borrowers making less than $125,000 per year or $250,000 for households. If the application goes live this month, the Biden administration said some eligible borrowers who apply early enough could see a drop in their balance before loan payments resume next year.

Read More: What Happens to Forgiven Loans if Biden Loses in Court?

Biden’s student loan plan relies on a 2003 law that allows the Education Department to waive loan requirements to support borrowers in an emergency. Congress passed it to help borrowers serving in the military in the wake of the Sept. 11 attacks. Biden declared the Covid-19 pandemic is such an emergency, even as deaths and infection rates fall significantly.

For opponents of the plan, the first hurdle will be proving in court that it will harm them in a concrete way -- not whether Biden has the power to forgive billions of dollars in student debt.

Here are the cases challenging the program:

Six GOP-led states sued the administration on Sept. 29, asking a federal judge in Missouri to immediately block the program before the federal government starts canceling loan balances in the coming weeks.

The Biden administration later clarified that the plan will not authorize forgiveness for some borrowers with privately held loans.

A judge is set to rule on the states’ request for a preliminary injunction by Oct. 13.

Garrison v. US Department of Education

A libertarian attorney sued on Sept. 27, arguing that borrowers in at least six states “will actually be worse off” as a result of the debt cancellation, as local laws require tax payments on canceled loans because they’re treated as income.

After the suit was filed, the Biden administration said any individual who qualifies for automatic relief under the one-time forgiveness plan will have an opportunity to opt out.

As a result, a federal judge in Indiana refused to temporarily block the plan from moving forward. The plaintiff has until Oct. 10 to file an amended complaint.

The state of Arizona sued over the plan on Sept. 30, arguing that its implementation will harm the state’s economy, increase its cost of borrowing and limit the ability of the state attorney general’s office to recruit legal talent. The office relies on other student debt relief programs to attract staff.

No action has been taken in the case.

The first suit challenging the law was filed Sept. 12 by a former candidate for the US Senate in Oregon, who claims the relief will worsen inflation and raise the interest expense on his mortgage as a result.

No hearing has been set on the request by Daniel Laschober, who ran for office as a Republican, to temporarily block the program.

A federal judge this week dismissed a challenge to the plan brought by a local taxpayers association in Wisconsin, ruling that the group didn’t have standing to sue.

The group’s lawsuit claimed that there is an “improper racial motive” behind Biden’s plan, which the White House has said seeks to help Black borrowers and advance racial equity.

The complaint also characterized the plan as “a massive taxing and spending policy passed without participation of the People’s representatives.”