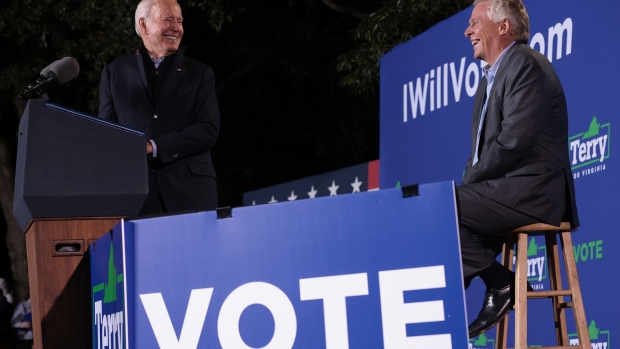 “To win the Republican nomination he embraced Donald Trump,” Biden said, joining McAuliffe before a diverse crowd of about 2,500 at a park in the Washington suburb of Arlington, Virginia, a heavily Democratic area where McAuliffe needs strong turnout to win.

“It was a price he had to pay for the nomination and he paid it,” Biden said of Youngkin, “but now he doesn’t want to talk about it any more. Well, I do.” The former president has repeatedly endorsed Youngkin, who seldom mentions him on the campaign trail.

With just a week before Election Day, McAuliffe is tied in the polls with Youngkin, a former co-chief executive officer of Carlyle Group Inc., after earlier holding a consistent lead. It’s closer-than-expected for a state Biden won by 10 points last November.

Biden’s remarks in Virginia marked the strongest attack on his former, and perhaps future, opponent, since taking office, and came at a time that his legislative agenda hangs in the balance and before he heads to Europe for a Group of 20 summit.

At times, Biden’s defense of his own agenda -- increased access to child care, new infrastructure projects like a new bridge nearby, a higher minimum wage -- bled into his support for McAuliffe’s similar agenda.

In a sarcastic reference to Youngkin’s trademark campaign outfit, Biden accused him of trying to avoid any association with Trump and reminded his audience of the Jan. 6 attack on the Capitol. “Extremism can come in many forms,” he said. “It can come in the rage of a mob driven to assault the Capitol. It can come in a smile and a fleece vest.”

The joint appearance came just three weeks after McAuliffe blamed Biden’s sagging approval ratings for his own slump in the polls, saying his campaign faced “headwinds from Washington.” In response to a question about the statement, White House Press Secretary Jen Psaki rebuffed the assertion, saying that Biden is the “most popular figure in Virginia of anyone currently running for president or any former recent president.”

Given Biden’s wide margin of victory in the state, and Democratic gubernatorial wins in Virginia going back to 2013, a McAuliffe loss on Nov. 2 would offer a stinging referendum on Biden’s presidency and the party. Democrats control Congress by a razor-thin margin, but Biden has become increasingly unpopular, especially with independents, raising alarm among party leaders seeking to keep control of the House and Senate.

In the final days of the campaign, McAuliffe has called in his party’s biggest names. On Wednesday, he’s set to campaign with Senator Cory Booker, a New Jersey Democrat. Vice President Kamala Harris is scheduled to appear with him again in Norfolk on Oct. 29. He’s also campaigned with Democratic National Committee Chair Jaime Harrison, former Georgia gubernatorial candidate and voting-rights activist Stacey Abrams.

Democratic strategist Jesse Ferguson said that if Democrats in Congress can come to an agreement on Biden’s domestic agenda before Election Day, it could give a last-minute boost to McAuliffe by rekindling Democratic enthusiasm.

“There’s a broad fatigue among Democratic voters, and delivering this economic plan will help crystallize how important it is that they turn out,” he said.

For his part, Youngkin is doing a statewide bus tour to promote early voting and seizing on frustration with last school year’s virtual learning, because of the pandemic, and controversy over how racism is taught in public schools. Youngkin has been running a barrage of ads highlighting McAuliffe’s statement in a debate that parents shouldn’t “be telling schools what they should teach.”

A Monmouth University Poll in mid-October found equal numbers of voters trusted Youngkin and McAuliffe on handling education, which was ranked second after the economy and jobs for top issues in the race.

McAuliffe served as Virginia governor from 2014 to 2018. The state doesn’t allow governors to serve consecutive terms.

As of Monday evening, 724,965 Virginians had cast a ballot during the state’s extended early voting period, more than three times as many early votes as in the 2017 gubernatorial race.