Expect an upward trend for oil, especially if it can stay above US$90 level: Trader

“The oil industry has not met its commitment to invest in America and support the American people,” Biden said Monday. He called the industry’s profits “a windfall of war.”

Companies that don’t show they’re reinvesting in production, he said, are “going to pay a higher tax on their excess profits and face other restrictions.” He added that he would “work with Congress to look at these options that are available to us.”

In his brief speech, Biden set out a promise that will be all but impossible to deliver. Many Democrats have unsuccessfully sought a so-called windfall profit tax for more than a decade. No such proposal is likely to pass the current Senate, evenly divided between Democrats and Republicans, and unless Biden’s party makes unexpected gains in next week’s elections, the GOP and centrist Democrats will be able to block it for the foreseeable future.

But the idea of imposing a tax on oil companies’ profits has garnered renewed attention among progressives in Congress after gasoline prices spiked to more than US$5 a gallon this summer. Biden has repeatedly scolded Big Oil for the combination of high pump prices and record profits in the months leading up to the elections.

Senator Ron Wyden, an Oregon Democrat and Biden ally who chairs the tax-writing Finance Committee, has floated a proposal that would establish a new federal surtax on oil companies that record a profit margin better than 10 per cent. 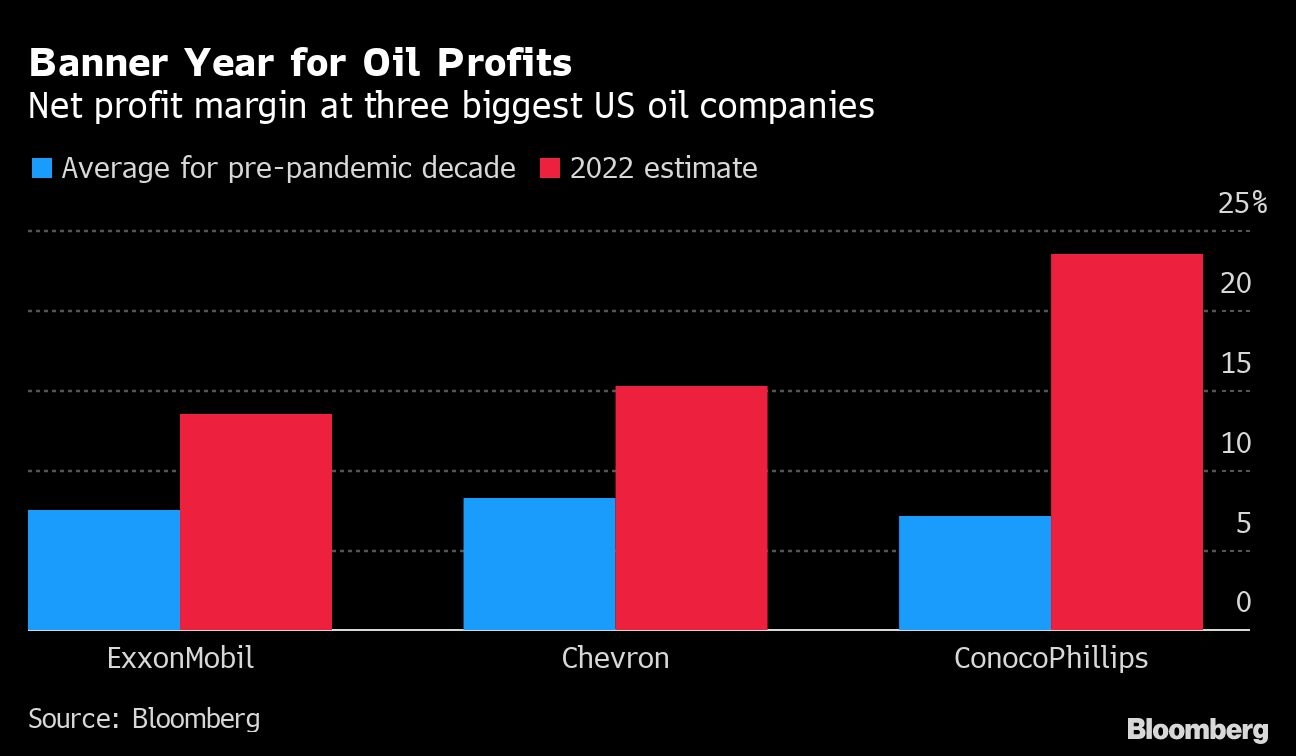 The S&P 500 Energy Index dropped after news of Biden’s planned windfall tax before regaining to close up 0.6 per cent. The index had traded up 2.1 per cent earlier in the day. ConocoPhillips, Pioneer Natural Resources Co., both domestically-focused oil producers, and Valero Energy Corp., a refiner, were the worst performers.

Administration officials have weighed other steps to encourage oil refiners to keep more gasoline and diesel inside the U.S., instead of exporting it, as domestic stockpiles shrink ahead of winter. New restrictions on the export of finished fuels, including diesel, could be imposed administratively.

Oil industry trade groups have argued a windfall tax would penalize domestic energy and fuel production right when the U.S. should be encouraging more of both.

“The history of a windfall profits tax is clear: reduced domestic production and increased dependence on foreign suppliers,” said Anne Bradbury, head of the American Exploration and Production Council, which represents oil producers.

Chet Thompson, head of the American Fuel and Petrochemical Manufacturers association, cast the move as a political stunt.

“Once again, the president is more worried about political posturing before the midterms than he is about advancing energy policies that will actually deliver for the American people,” Thompson said by email. “A windfall profit tax might make for good sound bites, but as policy, it’s bad for consumers. It’s likely to disincentivize fuel production and make matters worse for drivers.”

Oil executives say there’s a limit to how much they can do to ease prices in the short term. Major projects take years of planning and development and need to offer attractive long-term returns, supported by consistent energy policies. A windfall profits tax could deprive them of capital to steer into new drilling.

Chevron CEO Mike Wirth warned a windfall profit tax or export ban would be “short-sighted” because it would deter investment in energy. “Typically, if you want less of something, you tax it,” he said in a Bloomberg TV interview. 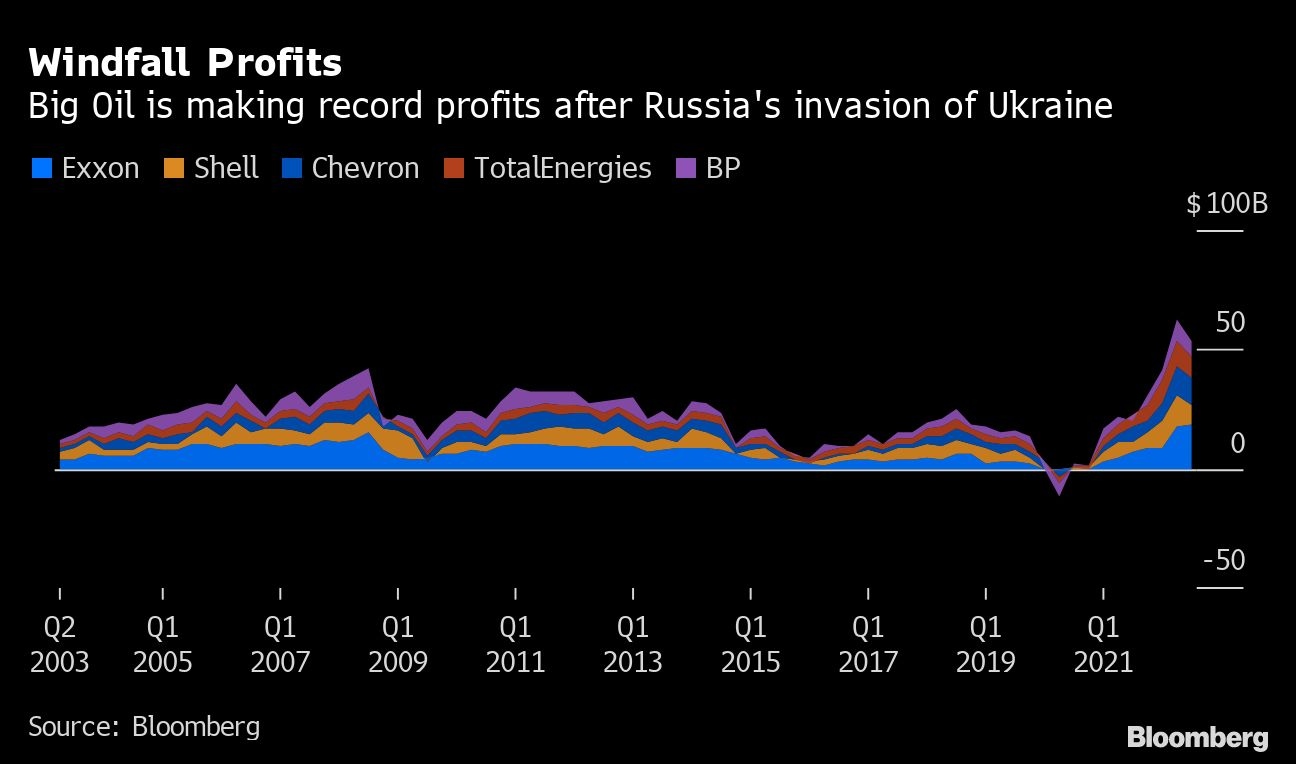 The Biden proposal resembles measures that politicians across Europe, and in some other countries such as India, are imposing on companies reaping record profits from fossil fuels and power generation. Mostly, those governments are using cash raised from windfall taxes to help subsidize soaring energy bills for households.

Critics of such plans say they’ll deter companies from making the kind of investments that are crucial for increasing supply, and keeping prices down, in the future -- a charge that may have more traction in the U.S., which unlike most European countries is itself a major oil and gas producer.

The U.S. enacted a windfall profit tax on the U.S. oil industry in 1980, ultimately generating some US$80 billion in gross revenues over the next eight years, according to the Congressional Research Service.

But that extra revenue may have come at the expense of domestic oil development; CRS analysts said U.S. crude production declined as much as 8 per cent over the same time period, even as the U.S. became more dependent on foreign imports.

Stubbornly high energy costs and their knock-on effect on inflation are weakening Democrats’ prospects heading into the Nov.  8 midterms. The vote will determine whether the party maintains its current House and Senate majorities. Americans continue to rank the economy and inflation as their top priorities in polling.

Biden has called on companies to invest more in fresh production for most of this year. But Exxon Mobil Corp., Chevron Corp., Shell Plc and TotalEnergies SE are on track to hand almost US$100 billion to shareholders annually in buybacks and dividends while reinvesting just US$80 billion in their core businesses this year, according to data compiled by Bloomberg.

The Western world’s five biggest oil companies made more than US$60 billion in the second quarter, beating the previous record set in 2008 by nearly 50 per cent. On Friday, Exxon announced it had even surpassed its record second-quarter results by earning US$19 billion in just three months.

“There has been discussion in the U.S. about our industry returning some of our profits directly to the American people,” Woods said. “That’s exactly what we’re doing in the form of our quarterly dividend.”

Biden responded in a tweet: “Can’t believe I have to say this, but giving profits to shareholders is not the same as bringing prices down for American families.”