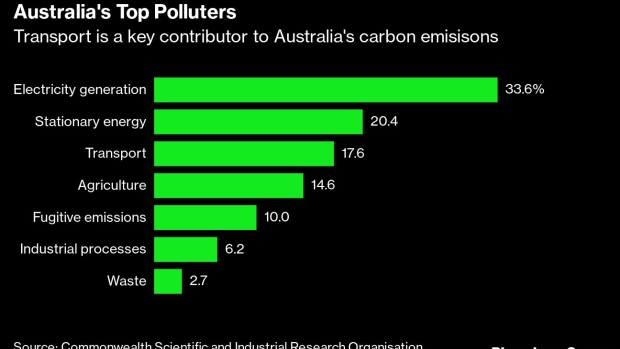 Prime Minister Anthony Albanese secured initial support earlier this month to lower emissions by 43% by 2030, an improvement on the previous administration’s goal of as much as 28%. Though the new target is closer to pledges by nations like Canada and Japan, the goal remains weaker than action promised by the US and UK.

While Australia’s new commitment “is a better target than we had before, I think it’s clear it’s not enough,” Cannon-Brookes said Friday at a Canberra summit on adoption of electric vehicles. “We have a lot of work to do.”

Atlassian Corp. co-founder Cannon-Brookes this year became the largest shareholder in utility AGL Energy Ltd., one of Australia’s top polluters, and has outlined proposals for the company to accelerate the closure of coal-fired power plants and to hit climate goals faster.

Transportation accounts for about 18% of Australia’s emissions, and lowering that sector’s greenhouse gas footprint by encouraging adoption of electric vehicles should also be a key area of focus, he said.

“That is one of the easiest sectors for us to actually attack because we have electric vehicle technology, so this is not some future magical thing we need to invent,” Cannon-Brookes said. “I drive one every single day, and have done for nine years. There’s plenty of them out there, and they’re getting cheaper.”