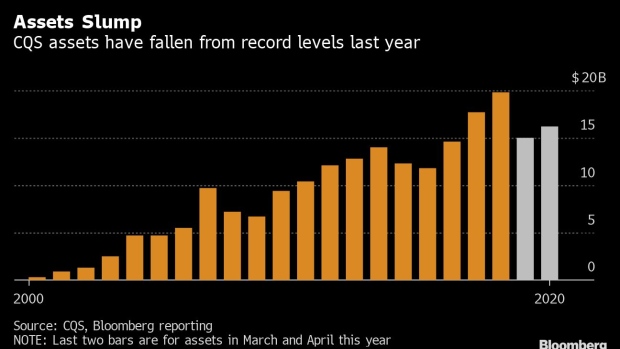 (Bloomberg) -- The outsiders that Michael Hintze brought in to his secretive hedge fund firm didn’t last long. Nor did their growth plans.

The billionaire’s firm, known as CQS, a bastion of money-making whose flagship fund has returned more than three times the average of hedge fund peers since it opened in 2005, is now headed in reverse.

The Hintze-managed fund plunged as much as 45% in March and April -- its worst-ever loss -- missing the rebound that followed the initial shock from the coronavirus pandemic even as peers recovered to post gains in April. More than $3 billion of assets were erased, leaving the firm with $16 billion. And that doesn’t include potential withdrawals from the fund’s clients, who are required to give six months’ notice.

“It’s going to be very difficult for them to attract new assets,” said Don Steinbrugge, head of Agecroft Partners, a Richmond, Virginia-based consultant that helps hedge funds gather assets. “If I was an existing investor, I would be concerned about significant redemptions from the fund over time, which could potentially cause the quality of the fund to erode.”

The situation reflects a stunning setback for the hedge fund legend and philanthropist who survived – and thrived – in previous crises. In January 2019, Hintze’s longtime friend, former London Stock Exchange Group Plc head Xavier Rolet, arrived at CQS headquarters overlooking Trafalgar Square as chief executive officer. “There’s only so much I can do to grow this,” Hintze said at the time, handing the task to his former Goldman Sachs Group Inc. colleague.

But Rolet was gone a year later with no explanation, followed by executives he’d hired and ventures in Greater China he’d announced. Hintze had a change of heart amid worries about the costs of expansion, according to people familiar with the matter. He’s now returning to the firm’s focus on credit markets.

Both Rolet and a spokesman for CQS declined to comment.

Rolet was an uncomfortable fit at the tightly knit firm from the beginning, insiders say. The CQS investment professionals resented their conference rooms being turned into a suite of offices for the new arrivals, according to two people familiar with the situation. By the time he left, the converted space had been turned back into conference rooms and Rolet was working from a desk on the trading floor.

In the wake of the personnel tumult, the trading strategy went awry.

CQS Directional Opportunities strategy, which Hintze himself manages, had losses of about 17% in April and 33% in March. Hedge funds lost an average 4.6% in those two months, according to data compiled by Hedge Fund Research Inc. The fund can write default insurance or sell derivatives without holding a position in the underlying security, according to an investor update. While such trades could generate outsized returns, they could smash a strategy.

As Europe and the U.S. locked down, his key strategies -- distressed, asset-backed, equities and volatility -- lost money, according to the fund’s letter to investors.

When the risk of insuring credits, such as oil and gas producer Chesapeake Energy Corp. and airline Deutsche Lufthansa AG, spiked in the market turmoil, CQS was forced to sell other assets to meet lenders’ collateral demands against the swaps, people said. One of the companies whose debt CQS insured, Whiting Petroleum Corp., filed for bankruptcy in April.

The firm sold a portfolio of European collateralized loan obligations in April for about a fifth of their face value to raise cash, say people with knowledge of the matter. CQS unloaded stakes in the lowest-rated tranches of European CLOs to a small group of banks.

“The global market sell-off has been severe and indiscriminate,” Hintze wrote to clients in April, explaining the decline. “We look forward to continuing with our opportunistic approach while remaining cognizant of the near-term challenges relating to the unknown effects of Covid-19 on the global economy.”

Another Rolet project, building out CQS’s equity long-short offering, was also derailed. The trio he’d hired for it -- Paul Graham, Roger Guy and Andrew Billett -- is spinning out on its own, with the firm agreeing to take a stake.

It’s not the first time turnover has spurred concern over talent retention. More than 10 people, including Simon Finch, former chief investment officer for credit, and Simon Finn, who led a unit buying distressed debt in Europe, were among those who left in 2016 and 2017.

That’s about when Hintze started to share phantom equity -- giving benefits of owning a company’s stock without the actual ownership -- in which staff would get 10% of the firm’s economic interest, according to an investor update seen by Bloomberg. By the second half of 2019, the program had more than a dozen participants. Before Rolet left, he was involved in further developing the plan.

Even with the market turmoil, CQS has raised about $1.9 billion this year, according to a person with knowledge of the matter. Most of the recent growth, though, has come in low-fee long-only funds. After the losses this year, CQS’s hedge fund assets have declined to about 35% of the firm’s total.

Through Hintze’s investing career, which began at Salomon Brothers in 1982, a contrarian approach has worked. In 2014, for example, Hintze told clients that oil was set to decline from its $110 a barrel level to as low as $40. During 2015, CQS sold energy bets and profited when oil eventually collapsed to $26.20 in February 2016. Hintze’s main fund returned 30.4% that year.

Even after the recent losses, his fund is still ahead of rivals and has avoided the industry slump that has driven more than 11,000 funds out of business since 2008.

In two interviews last year, Hintze, a donor to the Natural History Museum in London, the Victoria & Albert Museum, the Vatican, and charities led by Prince Charles, termed his business as significant but relatively small. His team could do much more. And that’s where Rolet came in.

Rolet set out to expand distribution and trading infrastructure, aiming to build out in New York and expand in Asia. The firm entered a strategic partnership with Beijing-based Zhongzhi Enterprise Group and Hong Kong-based DeepBlue Global Investment. Those deals have been scrapped and most of the new hires were out too. The two companies declined to comment.

Meantime, as Hintze’s traders worked from their homes amid the lockdown, Rolet joined Shore Capital as non-executive chairman of capital markets business in May.