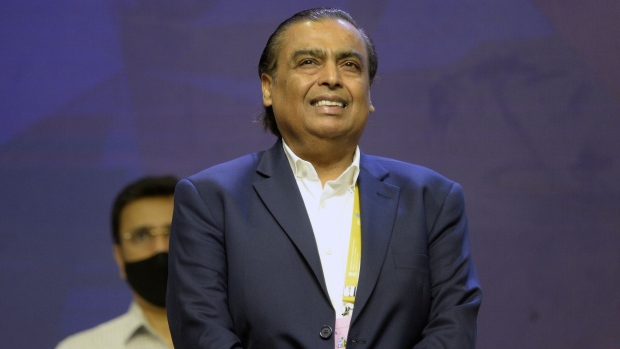 (Bloomberg) -- Asia’s second-wealthiest man, Reliance Industries Ltd. Chairman Mukesh Ambani, is setting up a family office in Singapore, according to people familiar with the move.

The Mumbai-based billionaire has picked a manager to hire staff for the new entity and get it running, the people said, asking not to be identified because the matter is private. The Ambanis have also chosen real estate, one of the people said.

A spokesman for Reliance, who also represents Ambani, wasn’t available for comment.

Ambani is the latest in a series of ultra-rich people to pick Singapore for their family offices — the organizations set up to manage the affairs of wealthy clans — joining the likes of hedge fund billionaire Ray Dalio and Google co-founder Sergey Brin.

The city-state has become an attractive hub for family offices thanks to its low taxes and relative security. The Monetary Authority of Singapore estimates about 700 were in place by the end of 2021, up from 400 a year earlier.

Read how family offices face a backlog of tax-break applications

But the rising number of global rich crowding Singapore’s shores is also resulting in higher prices for cars, housing and other goods. Deputy Prime Minister Lawrence Wong signaled in an August interview that the wealthy may face more taxes to boost inclusive growth.

Ambani’s move to set up the family office ties in with his larger vision of taking his retail-to-refining empire global and acquiring assets outside India. While announcing the appointment of Aramco’s chairman on the board of Reliance in 2021, the billionaire told his shareholders that this marked “the beginning of internationalization” of his conglomerate, without elaborating. “You will hear more about our international plans in the times to come,” he had said at the time.

Reliance paid $79 million for Stoke Park Ltd. in April 2021, adding an iconic UK locale that’s been the setting for two James Bond films. It also bought an indirect 73.4% stake in Mandarin Oriental New York for $98.15 million in January and an $80 million beach-side villa in Dubai this year.

Ambani, who is worth an estimated $83.7 billion according to the Bloomberg Wealth Index, wants the Singapore family office to be running within a year, one of the people said. His wife Nita Ambani is also helping to set it up, the people added.

Reliance has been pivoting from its legacy oil refining and petrochemicals business toward e-commerce, green energy and the expansion of its retail footprint across India. In 2020, its technology venture Jio Platforms Ltd. lured more than $25 billion from marquee Silicon Valley investors including Meta Platforms Inc. and Google. It has also unveiled ambitious plans to take on Amazon.com Inc. in the country, including in streaming.