After one of the roughest patches ever for Bitcoin enthusiasts, holders of the largest digital currency are facing an ominous technical price pattern with a name that suggests more pain ahead.

Known as a death cross, the measure shows up whenever an asset’s average price over the last 50 days drops below that of its 200-day moving average, an indication that its momentum is headed downward. And though it hasn’t occurred yet for Bitcoin, it looks to be on course to hit it later this week, according to Mati Greenspan, founder of Quantum Economics.

“The chart is pretty clear,” he said.

Bitcoin avoiding forming the death cross for another day, rising 2.6 per cent to around US$42,813 as of 2:44 p.m. in New York. Before Tuesday, it had notched only three up days since the new year started. Ether, the second-largest digital token by market value, also looks to be on track to form a death cross, though it also traded higher to around US$3,233 on Tuesday. 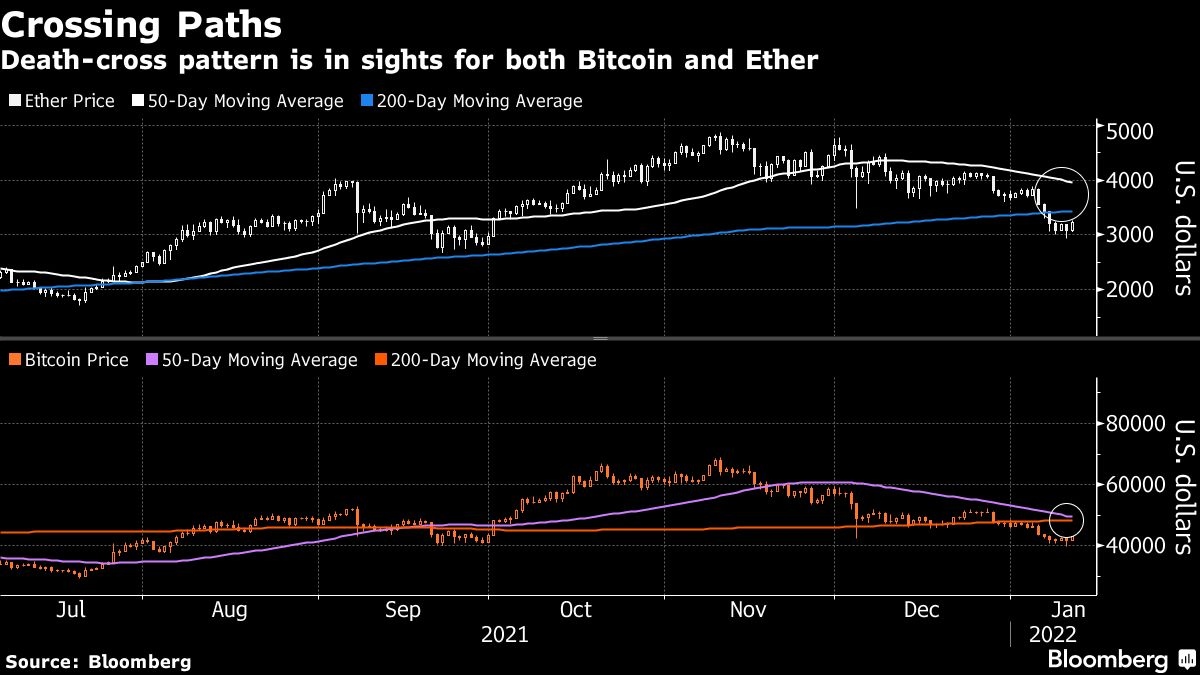 But when it comes to the death cross, “the history is really mixed -- there’s no surprise given that some of the macro backdrop is affecting price action, but we’ve seen a healthy bounce over the last 24 hours,” Juthica Chou, head of OTC options trading at Kraken, said on Bloomberg’s “QuickTake Stock” broadcast. “And I think the fundamentals are still really strong.”

Prior to Tuesday’s reprieve, cryptocurrencies had been under pressure in recent weeks, with Bitcoin dropping more than 30 per cent since reaching a high of almost US$69,000 in November. The latest stretch lower for digital assets is happening as odds rise that policy makers could commence a series of rate hikes as soon as March -- and that’s just one of several steps they’re set to take in removing liquidity. In such an environment, speculative investments lose their luster. Only 5 per cent of JPMorgan Chase & Co. clients now foresee Bitcoin hitting US$100,000 by the end of 2022.

The indicator is supposed to be bearish but Bitcoin’s track record around death-cross formations remains murky. It marked the grim-sounding pattern in June of last year, and another one in March 2020 proved no impediment to gains as it turned higher and formed a golden cross (when the pattern is reversed) two months later. But a death cross in November 2019 saw the coin trading lower one month later.

“Some people say it’s bearish, but for Bitcoin, just about all previous death crosses or golden crosses have proven to be a good buying opportunity, along with any other indicator under the sun for everyone who entered before 2021,” Greenspan said.

Whenever a death cross has occurred in the broader market indexes or stocks, most -- though not all -- of the bad news was priced in already, says Craig W. Johnson, chief market technician at Piper Sandler & Co. “I think time could be a bigger risk to BTC than price at this point.”

Meanwhile, the International Monetary Fund issued the latest warning that parallels between cryptocurrency price moves and the stock market could pose a risk to financial markets. Correlation between U.S. stock indexes and Bitcoin jumped to 0.36 in 2020, up from 0.01 between 2017 and 2019, according to the multi-nation organization.

Analysts have long noted that Bitcoin -- and, therefore, other cryptocurrencies -- tend to move in tandem with stocks. Lately, that relationship has strengthened and was even on display on Tuesday, with both stocks and crypto reversing early-morning losses to trade higher by the afternoon. Both have been volatile recently amid signs that the Federal Reserve was comfortable withdrawing stimulus at a faster pace than previously anticipated. 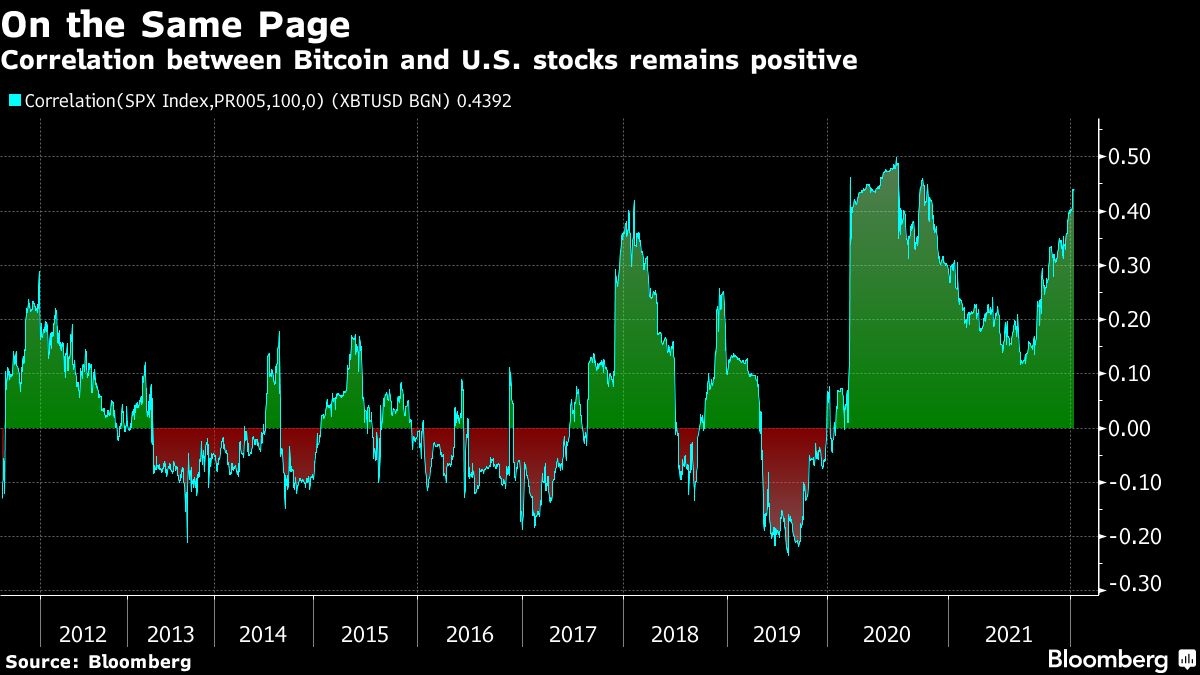 The 100-day correlation coefficient of Bitcoin and the S&P 500 currently stands at 0.44. That’s the highest such reading since the fourth quarter of 2020 and among the highest going back a decade. A coefficient of 1 means the assets are moving in lockstep, while minus-1 would show they’re moving in opposite directions.

The increasing interconnectedness between the asset classes “permits the transmission of shocks that can destabilize financial markets,” analysts said in a Tuesday report. Officials are especially concerned as more emerging-market economies adopt cryptocurrencies as legal tender, notably El Salvador which embraced Bitcoin as a form of payment last year.