Bitcoin rallied to around US$50,000 as Bank of America Corp. strategists threw their weight behind crypto as a new asset class.

The gain brings prices to the highest since early September, when El Salvador rolled out the cryptocurrency as legal tender. Bitcoin rose as much as 2.8 per cent in New York to touch US$50,369.

The universe of digital assets is “too large to ignore,” wrote strategists including Alkesh Shah and Jessica Reif Ehrlich. “Our view is that there could be more opportunity than skeptics expect.” 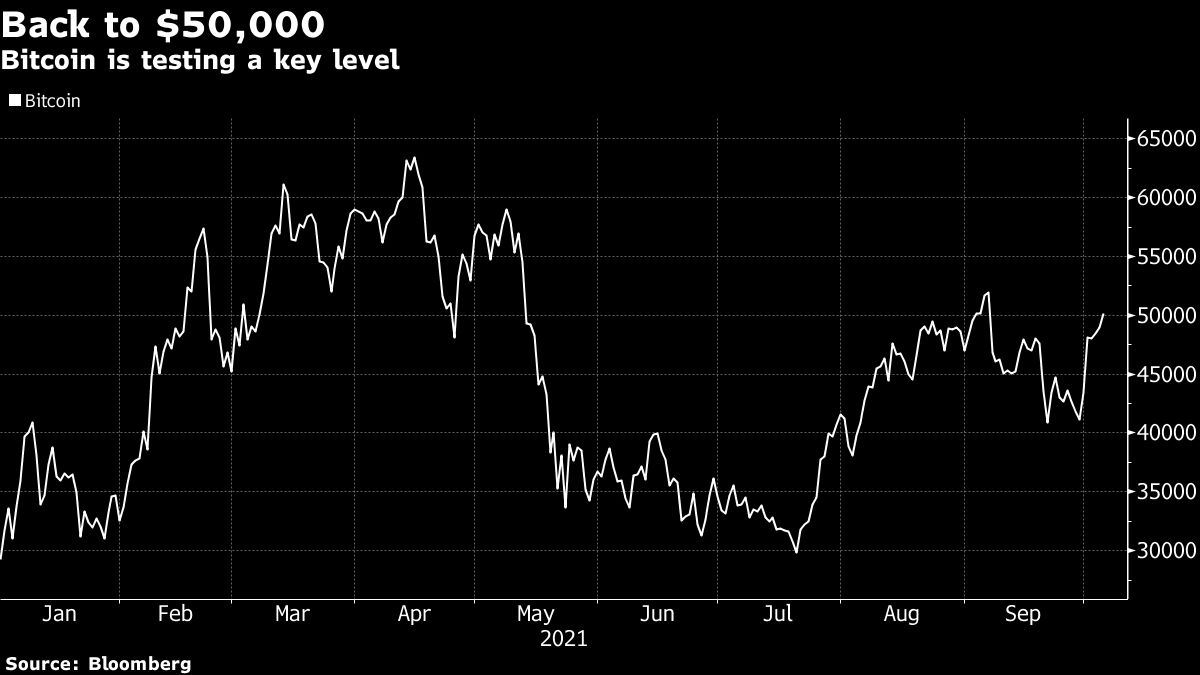 The Bank of America report shows that enthusiasm for crypto is gaining traction on Wall Street despite its many controversies. Just last month, China issued a blanket ban on transactions and U.S. financial watchdogs are investigating some of the biggest crypto exchanges.

In the eyes of Bank of America, more regulation could be a positive for crypto in the long run. Once rules are established, the uncertainty over how to invest in crypto will be lifted, the strategists wrote.

Bitcoin has been slowly making its way back to its previous highs after a meltdown in May that was triggered by China’s clampdown on crypto mining. Prices are up more than 60 per cent since a low in July.

With its latest rally, Bitcoin has broken through two key resistance levels and is now trading at the higher end of its two-month-long consolidation range, according to a report from Arcane Research. The coin hovered around US$45,000 for a while before finally breaking out. That means the US$46,000-US$48,000 range is a strong support level and the coin could trade in that area for some time, the report said.

Katie Stockton, managing partner and founder of FairLead Strategies, wrote that the cryptocurrency may soon be on its way to testing its April all-time high near US$65,000.

“We expect short-term overbought conditions to be weathered long enough for a test of minor resistance near US$52.9K, a breakout above which would target the all-time high,” she said.

“The Bitcoin price has moved around quite a lot even recently and so when we see dips in prices, we often see that as an opportunity and investors moving in to buy those dips,” Grayscale Investments CEO Michael Sonnenshein said in an interview as part of the Bloomberg Invest Global conference. “If they fundamentally have not changed their perception or their conviction in an investment, but they can buy an asset 10 per cent, 15 per cent, sometimes 20 per cent cheaper than they could a day or two days ago, well that’s a compelling opportunity.”

Also speaking at the conference was Dawn Fitzpatrick, CEO and chief investment officer of Soros Fund Management LLC. She said her firm holds some coins and noted that crypto “has gone mainstream.”