Cryptocurrency prices slumped as a broad selloff sparked by worries about contagion from China Evergrande Group swept through global markets.

Bitcoin was down 8.1 per cent to trade around US$43,743 as of 5:11 p.m. in New York. It had dropped as much as 10.7 per cent earlier, which pushed it below US$43,000 and to its lowest level since the beginning of August. Ether briefly dropped below US$3,000. Popular DeFi tokens some of the biggest declines: Cardano fell more than 10 per cent over the last 24 hours, as did Dogecoin, while Polkadot lost roughly 16 per cent, according to CoinMarketCap.com.

The losses mirrored the action in the broader market as investors weighed the risks coming from Evergrande’s debt woes and this week’s Federal Reserve meeting. The S&P 500 fell 1.7 per cent in its worst session since May, while European equities tumbled the most in more than two months. 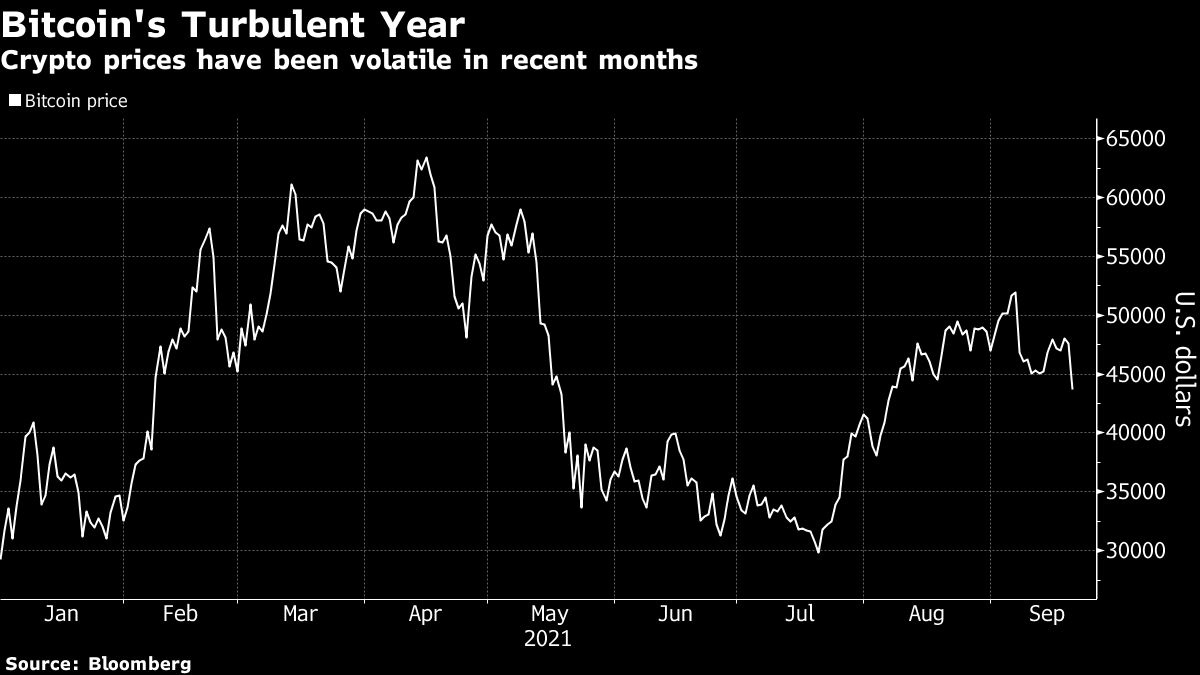 “Some have attributed the sudden dip to the currently ongoing Evergrande situation in China which has already caused turmoil in traditional markets,” wrote Jonas Luethy, a sales trader at GlobalBlock, the U.K.-based digital asset broker. “Analysts have suggested a choppy week is ahead, with a potential pullback to as low as US$41,000.”

The swiftness of the plunge was likely accelerated as more than 272,000 traders had their accounts liquidated over the past 24 hours, equal to around US$1.3 billion worth of crypto, according to data from Bybt, a crypto futures trading and information platform.

“This is part of a well-established pattern where it sells off as traders cash in their riskier assets to cover margin calls and/or sit on the sidelines until markets calm down and they feel more comfortable going back into riskier positions,” said Leah Wald, CEO at Valkyrie Investments. 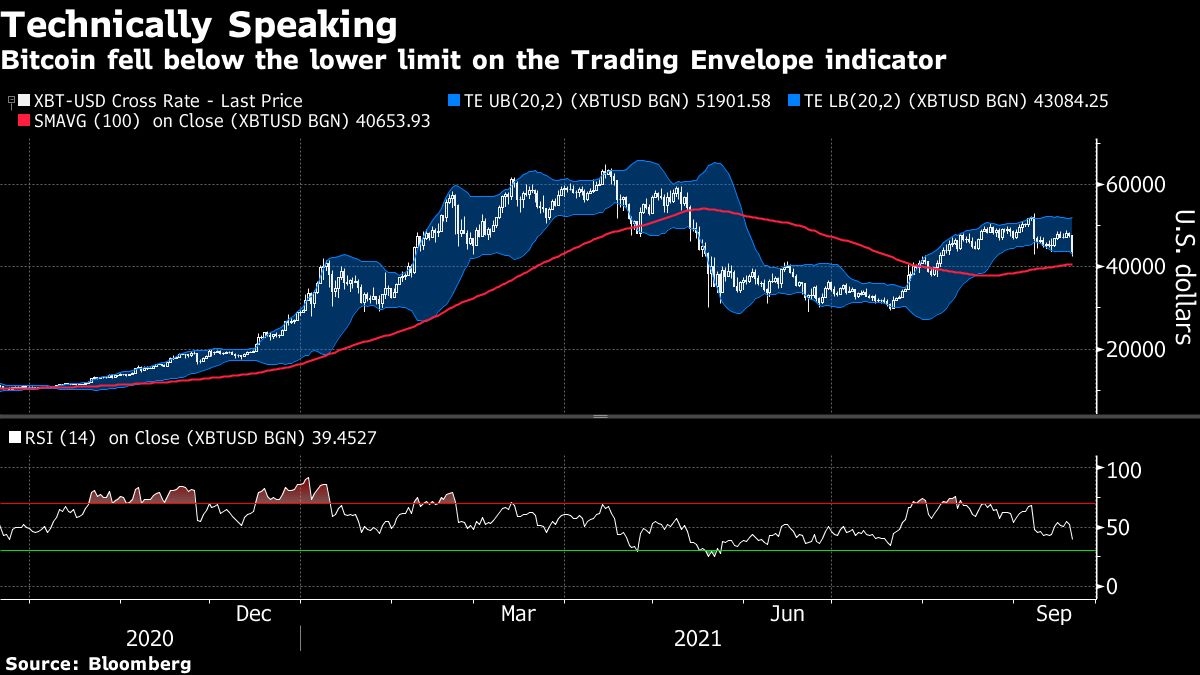 Chartists say Bitcoin could test its 100-day moving average, which currently sits around US$40,655. Should it fall to that level, it could find support at US$40,000. Still, other signals show it could be in for a reprieve: the coin fell below the lower limit on the Trading Envelope indicator, suggesting it dropped too far, too fast. And its 14-day Relative Strength Index (RSI) at 39 shows it’s creeping toward oversold levels.

Although Bitcoin doesn’t always trade in tandem with financial markets -- a characteristic that made it a tempting proposition from a portfolio-diversification point of view -- its correlation on a 30-day basis to futures on the Nasdaq 100 has been consistently positive since February last year. A reading of 0.5 -- which it’s close to now -- means they’re moving in the same direction quite often these days.

Investors say that while a link with tech stocks make sense -- both types of investments may be thought of as appealing to the same tech-savvy investor pool -- strong correlations are also showing up for small-cap stocks and the S&P 500. That’s probably because as Bitcoin becomes more integrated in global financial markets, it should respond more to the changes in risk appetite that drives global sentiment. 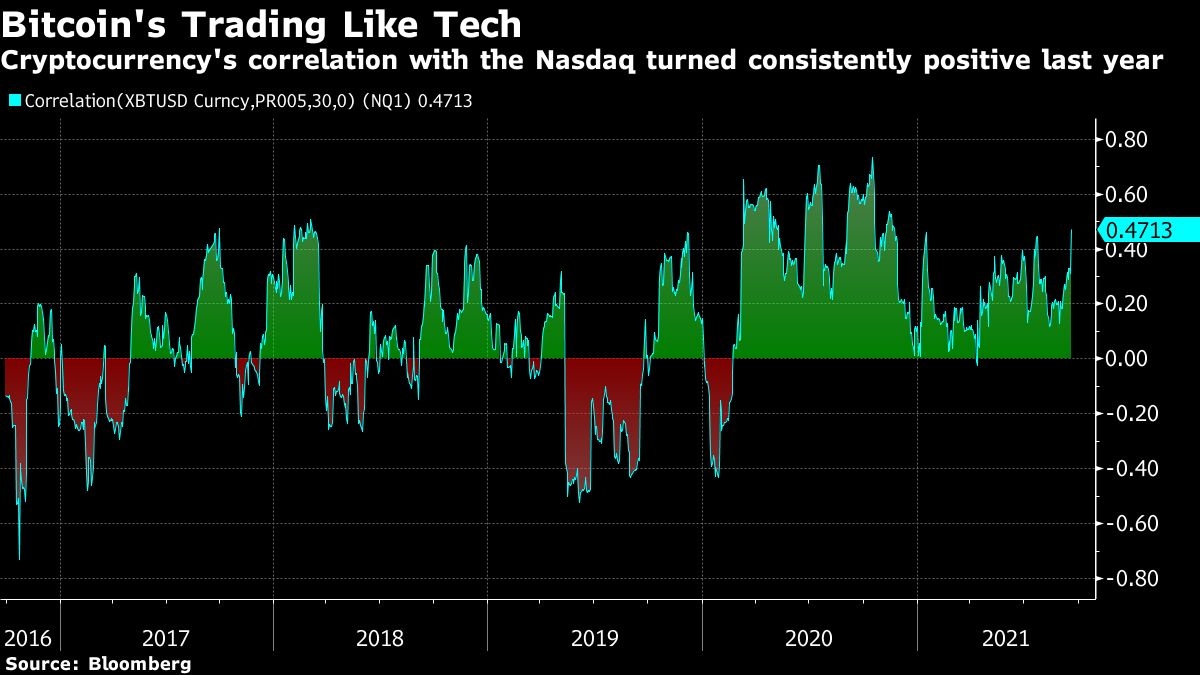 Meanwhile, El Salvador’s President Nayib Bukele said the country had “bought the dip,” in Bitcoin, adding 150 tokens to raise its total holdings to 700 -- about US$32 million based on current pricing. The nation recently adopted Bitcoin as legal tender in a controversial move that met with technical glitches and protests.

“Not everyone is selling,” said Valkyrie’s Wald.

We just bought the dip.

El Salvador’s enthusiastic adoption of Bitcoin is one of the reasons why prices have been trending higher and recently hit a four-month high. Still, the market has a way to go before recovering losses since a selloff in May. 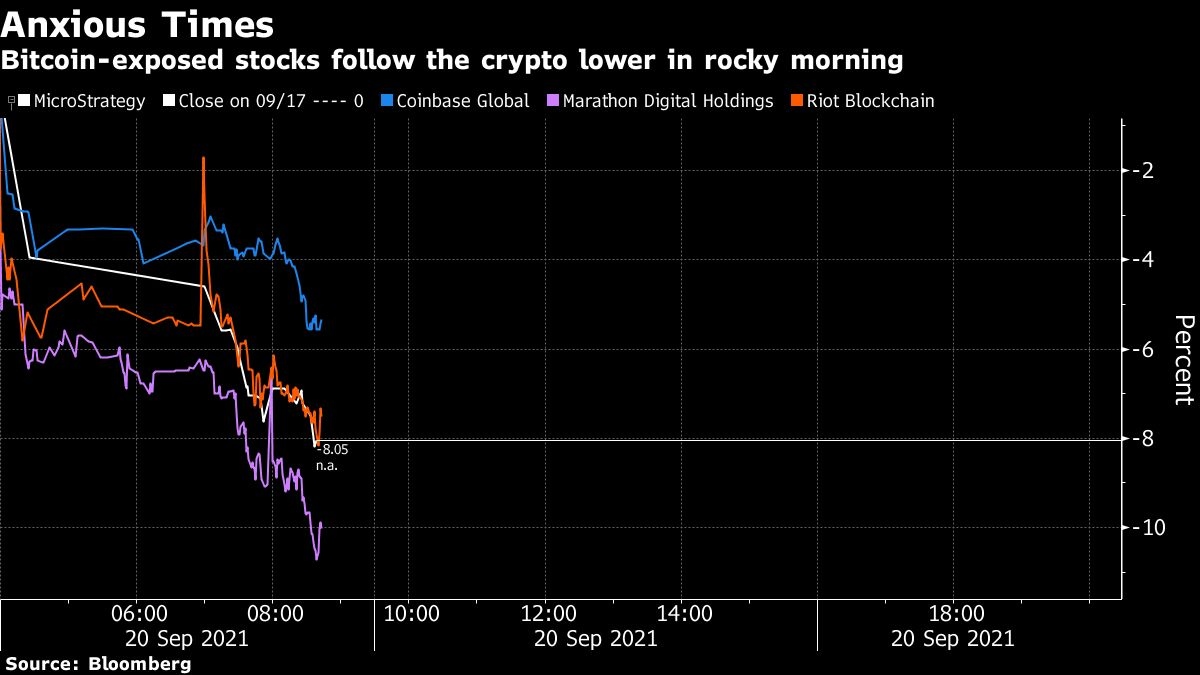 “On a day like today, where you have the perfect storm, I think people just go to, ‘What can I sell quickest? What do I have access to at 2 in the morning?,’” said Scott Bauer, chief executive officer at Prosper Trading Academy. “If they’re holding crypto, which is obviously an around-the-clock market, maybe that’s the first place they look,” he said, adding that the news out of China is a negative for the crypto space.