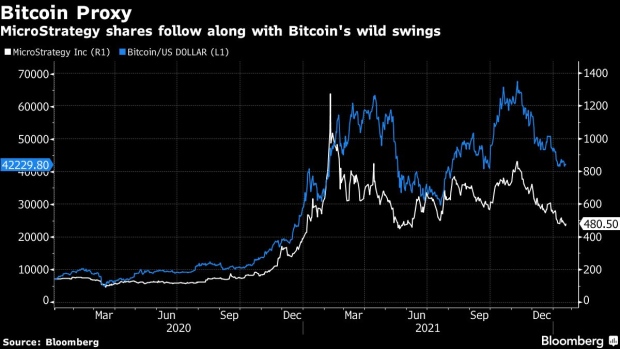 The enterprise software company’s growing pile of Bitcoin has effectively made its shares a proxy for the digital asset. Yet, its founder and chief executive officer remains sanguine when asked if he is tempted to sell in the face of what could be an extended bear market.

“Never. No. We’re not sellers,” the 56-year-old told Emily Chang on Bloomberg Studio 1.0, heeding to the popular hodl, or hold on for dear life, mantra. “We’re only acquiring and holding Bitcoin, right? That’s our strategy.”

Saylor shot the lights out in the summer of 2020 when the company -- based in Tysons Corner, Virgina -- first announced its cash management plan centered around buying Bitcoin. The company’s stock gained more than 900% at one point. But its aggressive stance in continuing to add to its roughly $5 billion Bitcoin stockpile -- tapping equity-linked and debt markets to fund the habit -- has shown diminishing rewards as of late.

Shares of MicroStrategy have underperformed Bitcoin during its selloff as risk appetite wanes. Additionally, the average listed price announced for every Bitcoin purchase since late February has been above current trading levels. However, the company’s total coffers -- roughly 124,391 Bitcoins through the end of December, according to filings -- remains in the black due to early acquisitions.

Saylor said Bitcoin’s slide from nearly $69,000 in November to less than $40,000 this month doesn’t make him nervous about his holdings. In fact, they are a source of “great comfort,” considering rising inflation, he said.

“The best defense against inflation is a Bitcoin standard. So I don’t really think we could do anything better to position our company in an inflationary environment than to convert our balance sheet to Bitcoin,” he said.

Saylor was motivated to adopt a Bitcoin strategy as an alternative to stock buybacks and acquisitions in the face of slowing cash flow growth relative to the U.S. money supply. The idea turned him into an overnight crypto celebrity with the likes of Elon Musk following suit and adding Bitcoin to Tesla Inc.’s balance sheet. Yet, money managers continue to debate the merits of the world’s largest digital asset as a hedge against inflation due to the lack of historical data.

“I had a sense of the consequences if we did nothing, because I had seen the demise of 99% of my competitors, and I could see where we were headed if we stuck with the status quo,” he said. “We would have to either adopt a Bitcoin strategy or sell the company. And we elected to pursue Bitcoin.”

“I feel like it’s consolidating at this level,” said Saylor, someone who’s touted Bitcoin as a buy from $11,000 to $59,000. “This is a great entry point for institutional investors.”