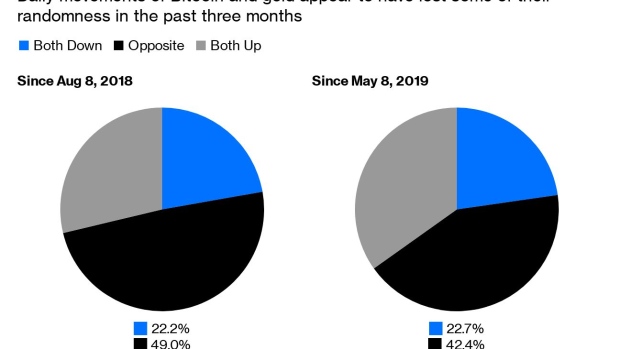 (Bloomberg Opinion) -- As gold climbed toward the psychological $1,500 mark, another speculative asset has also been staging a recovery.

Bitcoin is well away from its historical peak; in fact, it’s below the recent June high. However, the two assets look to have been marching in lockstep over the past three months, a relative rarity.

We noticed a similar phenomenon three years ago. At the time, U.K. voters had just made the surprise decision to exit the European Union. The pound sank and the rest of the world was left in a panic trying to figure out what it all meant. At the time, we were unconvinced that bitcoin had joined gold as a haven asset, writing that it would take a few more bouts of global fear to confirm that hypothesis.

Uncertainty is back. U.S.-China tensions have escalated beyond trade to include a technology Cold War and this week’s managed drop in the yuan, which swiftly incurred the wrath of President Donald Trump.

The correlation between Bitcoin and gold over the past year is 0.496. In the past three months, that shot up to 0.827, according to our analysis. (A correlation coefficient of 1 indicates that the assets move in perfect lockstep, while minus-1 would show they move in exact opposite directions.)

It’s important to offer the standard statistical disclaimer: Correlation doesn’t imply causation. I’m not convinced that Bitcoin always moves purely through market forces. Like others, I suspect that Tether, a so-called stablecoin with contested legitimacy, plays a large role in the liquidity of crypto markets and affects the price of Bitcoin.

However, the recent movement of gold and Bitcoin doesn’t appear random. In simple terms, think of it like the flip of two coins, each representing the price movement of the assets on any given day. On average, we’d expect to see two heads 25% of the time and two tails 25% of the time – in other words, the two assets would move in the same direction 50% of the time.

Sixty-six days of trading data may not be statistically significant, but that doesn’t mean this should be ignored. The evidence is growing that investors – rightly or wrongly – see Bitcoin as a refuge in times of turbulence.