Bitcoin dropped briefly below US$40,000 for the first time since August amid rising criticism from regulators, before rallying as the mood in global markets improved.

The largest cryptocurrency broke a three-day losing streak, rising 2.9 per cent to US$42,132 as of 6:34 a.m. London time on Wednesday. It earlier slid as much as 3.2 per cent to US$39,625. Tokens including Ether, Solana and Litecoin were slightly lower over the past 24 hours.

Fears of contagion from the debt crisis at China Evergrande Group and expectations that the upcoming Federal Reserve meeting will signal a scaling back in asset purchases later this year are among the impediments for investors. An Evergrande filing on a bond interest payment, though vaguely worded, and a liquidity injection into the financial system by China’s central bank appeared to ease some but by no means all investor concerns.

The price action “demonstrates that Bitcoin isn’t immune to the selloff in risk-on assets across traditional markets,” said Antoni Trenchev, co-founder of crypto lender Nexo. “Bitcoin needs to retake the 200-day moving average at US$46,000 and consolidate before a collective sigh can be released.” 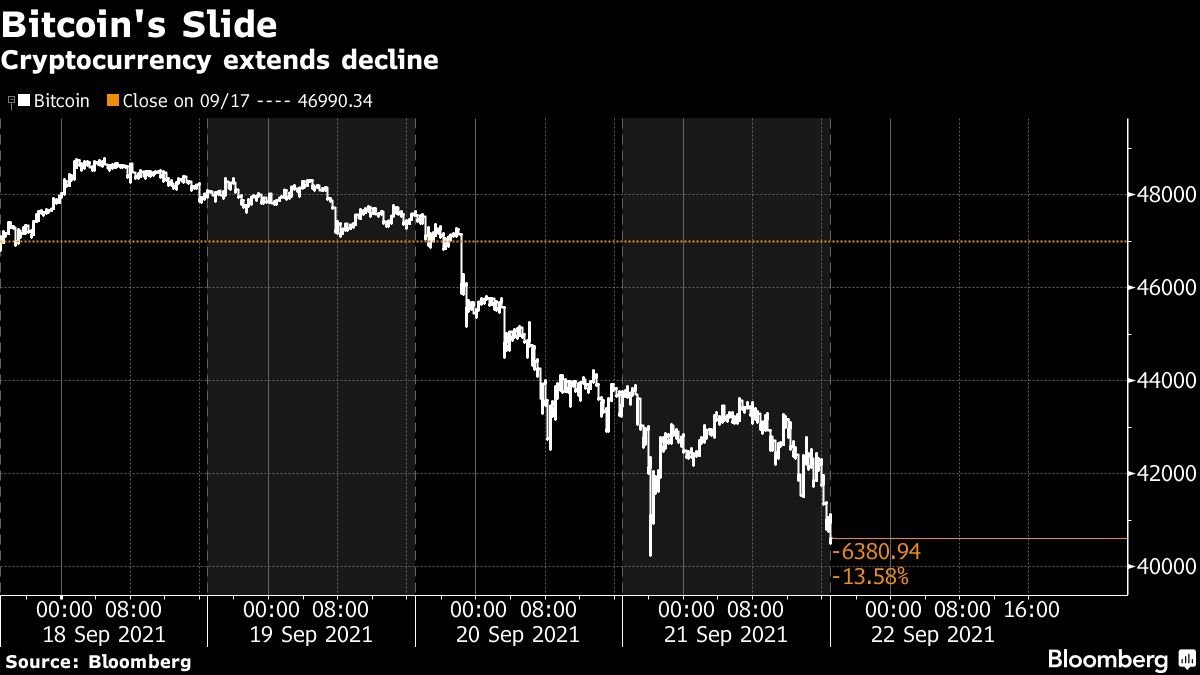 In a Tuesday discussion on cryptocurrencies, U.S. Securities and Exchange Commission Chair Gary Gensler said past instances of banks and other firms offering private forms of money have failed.

Gensler reiterated that U.S. securities rules give his agency great authority over digital tokens. He also said there are some “gaps” in oversight of digital tokens that Congress could help close, such as regulating crypto exchanges.

Meanwhile, the U.S. agency that had once been the great hope of the cryptocurrency world is now issuing strong warnings to the industry that it’s in danger of echoing the toxic culture before the 2008 financial crisis.

Michael Hsu, the acting chief of the Office of the Comptroller of the Currency, argued Tuesday that cryptocurrencies and decentralized finance may be evolving into threats to the financial system in much the same way certain derivatives brought near collapse more than a decade ago.

Separately, the Pyth crypto-data network on Monday briefly reported Bitcoin’s price as US$5,402. “Engineers are continuing to investigate the cause and a full report is in the works,” it said in a tweet that day.