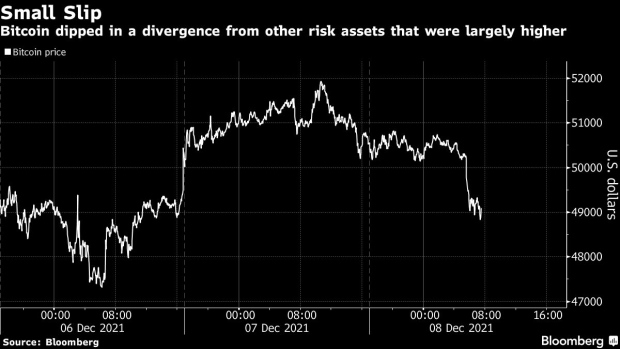 Bitcoin snapped a three-day rally, dipping back below the $50,000 price level initially breached during this past weekend’s flash crash.

The largest cryptocurrency by market value declined as much as 3.7% to $48,685. Ethereum, Solana, Cardano and Shiba Inu tokens also fell. The Bloomberg Galaxy Crypto Index slumped about 1.8%, declining for the fifth time in six trading sessions.

Bitcoin and other cryptocurrencies dove this weekend amid a greater risk-off sentiment that also encompassed selloffs in many areas of the U.S. stock market. It happened as spiking inflation is forcing central banks to tighten monetary policy, threatening to reduce the liquidity tailwind that lifted a wide range of assets. Bitcoin tumbled as much as 21% on Saturday.

After a record-breaking run this year, digital assets are the “top contender” for a “major correction” in 2022, with nearly three-quarters of institutions polled saying they’re not an appropriate investment for most retail investors, according to a survey done for Natixis Investment Managers. The combined total of assets managed by respondents clocks in at $12.3 trillion.

Dire predictions for its demise have been a constant for Bitcoin since its debut a little more than a decade ago. Most have been to little avail. Since breaking into the mainstream consciousness, Bitcoin has jumped more than 5,000% over the past five years.