Bitcoin surged Monday to a nearly three-month high as policy makers hashed out last-minute compromises over how to tax crypto assets.

The largest digital coin rose as much as 5.4 per cent to reach US$46,245 during New York-trading hours. The rally is a continuation of recent momentum -- the coin is up roughly 17 per cent over the past week.

Peer coins also benefited, with Dash, Ether and Litecoin, among others, each up at least 5 per cent. The Bloomberg Galaxy Crypto Index of larger digital assets rose 8.1 per cent at one point, also its highest since May.

“This move should be telling us that the worst is behind us for now,” said Matt Maley, chief market strategist for Miller Tabak + Co. Unless it reverses the move immediately, it could quickly advance toward US$50,000, where it could find some resistance. Still, “the action in very bullish on a technical basis,” he said.

The rally comes as a bipartisan groups of senators, who have been debating over a cryptocurrency reporting requirement in the US$550 billion infrastructure bill, reached a compromise, Bloomberg News reported. However, it’s not yet clear it will get a vote.

“Washington now realizes what a force and how many different people across the United States are very passionate about cryptocurrencies,” Blockchain Association’s Kristin Smith said on Bloomberg’s “QuickTake Stock” streaming program, adding that the issue has helped unify the crypto community. “The more clarity, the more certainty that the industry has, the better off that we will be in the long run.”

Meanwhile, traders are watching Bitcoin’s charts for clues as to where it could go next. The coin’s 14-day Relative Strength Index (RSI) shows it’s overbought, though it breached its 200-day moving average line amid the rally. The coin could still find resistance there -- as it did in May -- though a sustained position above it would be considered a bullish development. Many are eyeing US$50,000 as the next key threshold.

“Bitcoin has found its groove once more over the last week,” wrote Craig Erlam, a senior market analyst at OANDA Europe. “Now very much back into bullish territory, the question is how far it can go this time around.” 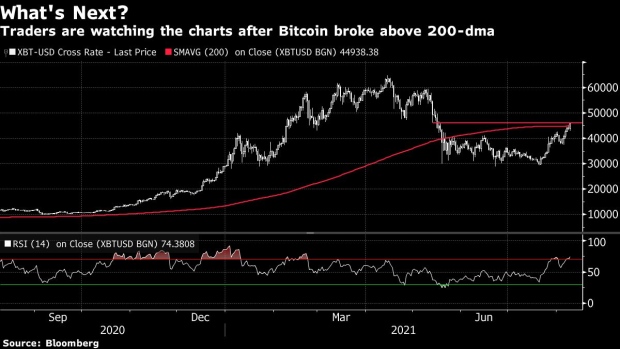 Having corrected more than 50 per cent and formed solid bases of support within a potentially longer-term bull market, the odds are tilted in Bitcoin’s -- and Ether’s -- favor toward resuming its upward trajectory, wrote Bloomberg Intelligence’s Mike McGlone in a note. Post-halving years have historically seen great appreciation, he said, and the original cryptocurrency could reach US$100,000.

“A question is whether supply-and-demand conditions have deteriorated since the start of 2021 and compared with Bitcoin’s past,” McGlone wrote. “Our take is that underpinnings are bullish in a maturing environment.”