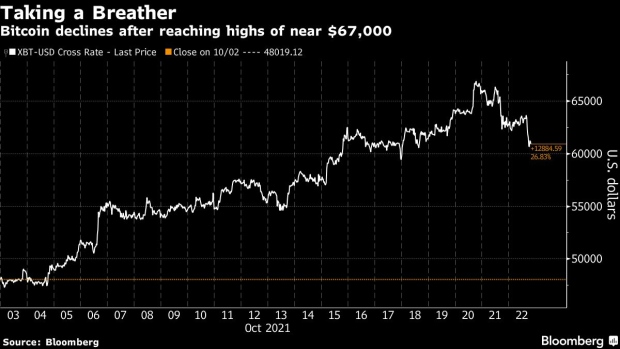 (Bloomberg) -- Bitcoin’s record-breaking week is ending on a down note.

The world’s largest digital coin, down for a second straight day, has lost about 8% since reaching an all-time high of almost $67,000 Wednesday, a decline that’s wiped out more than $100 billion in market value.

Other coins weren’t spared either -- Ether, second in rank by market value, has also dropped, losing 3% over the last two sessions. The Bloomberg Galaxy Crypto Index, which tracks some of the major digital currencies, fell 5% on Friday alone.

The coin had, earlier in the week, embarked on a historic run to all-time highs, reaching the milestone amid a watershed moment. Two futures-backed U.S. Bitcoin exchange-traded funds made their debuts this week -- the first, the ProShares Bitcoin Strategy ETF (ticker BITO), which   ranked as the second-busiest launch ever, taking assets in the fund over $1 billion in just two days. The second, the Valkyrie Bitcoin Strategy ETF (ticker BTF) saw less-robust demand, with the ETF falling in early trading.

Meanwhile, others hoping to launch soon are still in the queue, meaning that competition for assets or industry recognition could heat up.

“The new products will now compete with one another and investors will need to do additional due diligence to understand the differences between the underlying assets and tax treatment,” said O’Rourke.

Lindsey Bell, chief investment strategist at Ally Invest, says there is such a thing as too much popularity in the futures-ETFs space. Still, the products have opened the door to a new base of crypto-curious investors. “And for long-time crypto investors, the SEC’s blessing on these ETFs is another stamp of legitimacy for the space. Old Wall Street and new Wall Street are slowly coming together,” she said.