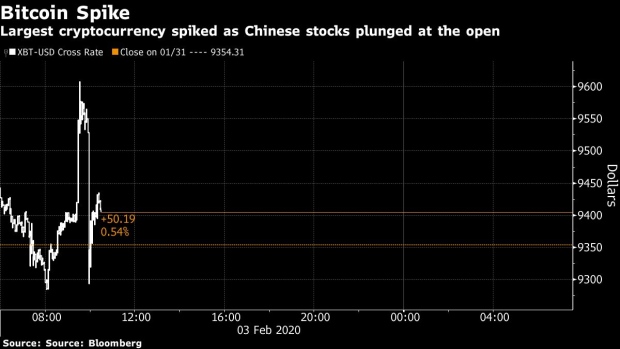 Bitcoin surged to $9,608, the highest since October, shortly after markets opened at 9:30 a.m. in Hong Kong, before giving back most of those gains less than half an hour later.

The wider Bloomberg Galaxy Crypto Index tracking a basket of digital assets reached the highest level since September before paring some of its climb, maintaining a 3.9% gain as of 10:20 a.m. in Hong Kong.

Chinese stocks plummeted by the most since an equity bubble burst in 2015 as they resumed trading Monday, in the first opportunity for many investors in China to react to the worsening virus outbreak. The CSI 300 Index dropped as much as 9.1% as onshore financial markets reopened for the first time since Jan. 23.

The spike in Bitcoin today is also indicative of how far the largest cryptocurrency has come since it broke out of its longer-term downtrend in December, said Vijay Ayyar, Singapore-based head of business development at crypto exchange Luno. The coin is up more than 40% from its low in mid-December.

“We’re potentially seeing a final wave rally in Bitcoin with the current bullish action post the break of the downtrend,” Ayyar said, adding that “there is support around $9,250.”

To contact the editors responsible for this story: Christopher Anstey at canstey@bloomberg.net, Joanna Ossinger, Ravil Shirodkar