Bitcoin swung between gains and losses after tumbling to an almost 11-month low, while the TerraUSD stablecoin continued its downward spiral.

The world’s largest cryptocurrency by market value fell as much as 6.2 per cent to US$29,085 before trading little changed. Analysts had been watching the US$30,000 level as a key threshold, with many projecting that losses could accelerate once the coin falls below it.

Meanwhile, the TerraUSD algorithmic stablecoin continued to spiral lower, trading at less then 30 cents. Backers of the coin are trying to raise about US$1.5 billion to shore up the token after it crashed from its dollar peg, according to the founder of a firm that was approached about the deal.

“Bitcoin and cryptos have become a risk-on/risk-off trade this year and the CPI data is a risk-off development,” said Matt Maley, chief market strategist at Miller Tabak + Co. “As for Terra, this news is having an impact as well. Its collapse is lower confidence in an asset class that has been losing confidence among investors all year.”

Other cryptocurrencies also fell, with Bitcoin Cash losing more than 11 per cent and Dash dropping nearly 16 per cent. 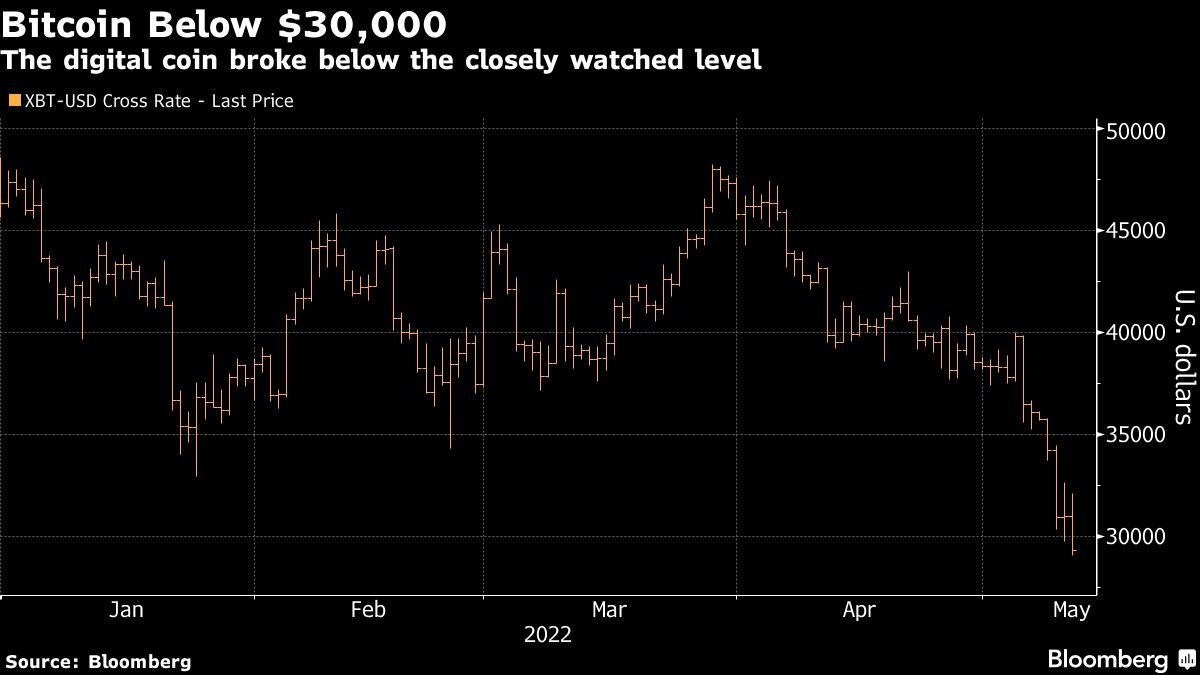 The drop came after data showed US consumer prices rose by more than forecast in April, indicating inflation will persist at elevated levels for longer. The data point also suggests the Federal Reserve will stay on its path of aggressive interest-rate hikes.

“There is extreme fear across the crypto market,” said Marcus Sotiriou, an analyst at the UK-based digital-asset broker GlobalBlock. “In addition to ongoing macro headwinds, there is now a fundamental risk to the crypto industry as the UST stablecoin has de-pegged from US$1.”

Cryptocurrencies and other riskier assets have been under pressure all year. The Federal Reserve and other central banks are raising interest rates to fight red-hot inflation, creating an unfavorable environment for risk assets.

The area around US$30,000 had been an “especially sensitive zone,” for Bitcoin, wrote James Malcolm, head of foreign exchange and crypto research at UBS. That’s where mining economics turn negative, “ which could potentially lead to increased coin sales by this key cohort,” he said. He added that long-term accumulators like MicroStrategy Inc. begin to fall below historical breakevens.

“Below this there is little technical support until the low-20ks, where margin calls kick in,” Malcolm wrote. 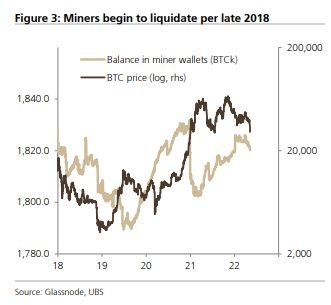 Bitcoin’s Relative Strength Index is now at 21, showing that it’s at its most oversold since January. The coin now needs to hold US$28,000. A break below that level could start a new wave of selling.

Still, a lot of crypto investors, cognizant of the fact that Bitcoin has gone through a boom-and-bust cycle before only to recoup losses over and over again, are preaching patience.

“Ultimately every investor needs to size positions based on their risk level and time horizon,” said Alex Tapscott, managing director of the digital asset group at Ninepoint Partners. “We believe Bitcoin will recover and that we’re still in the early stages of this new internet of value. Keep calm and HODL.”