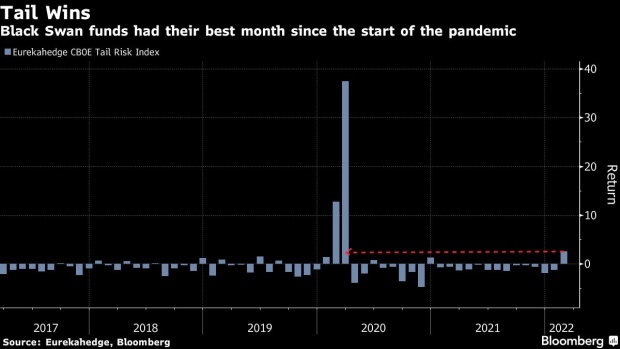 (Bloomberg) -- Money manager Sushil Wadhwani could barely get a meeting started last year before clients started grilling him for advice on how to survive the next market crash.

So in February, the chief investment officer of PGIM Wadhwani duly launched a defensive fund that takes short positions in equities and buys haven currencies, among other things.

“We would schedule a meeting to talk about our flagship strategy and in about five minutes they’d pivot,” said Wadhwani, who sat on the Monetary Policy Committee at the Bank of England before starting a money management firm later acquired by PGIM Quantitative Solutions. “Clients said they’d prefer a highly reliable protective portfolio against equities going down.”

Demand for market hedges is growing on Wall Street as Russia’s invasion of Ukraine sparks a global security and energy crisis, just as inflation runs amok and the Federal Reserve gears up to hike rates aggressively.

So-called Black Swan funds designed to protect against extreme selloffs have grown to more than $5 billion from $3.8 billion at the end of 2020, according to Eurekahedge Pte Ltd.

While the market impact of Russia’s invasion of Ukraine was smaller than that of the global pandemic, it was enough to hand investing styles that ride low-probability but high-risk events their best month in February since Covid hit.

“With the latest crisis, people tend to become more fearful and then they suddenly realize the benefits of this kind of particular portfolio,” said Richard “Jerry” Haworth of 36 South Capital Advisors LLP, who manages one such strategy in London.

Amid war, entrenched inflation and fears that the Fed’s tightening campaign will spur an economic slowdown, returns in the first quarter cratered to the worst since 1980 across equity and fixed-income markets, data compiled by Bloomberg show.

Now Nouriel Roubini, who earned the nickname “Dr. Doom” for his dark prognostications in the global financial crisis, warns the world may be “a standard deviation away from a semi Black Swan event.”

All that is firing up the industry of doommongers. There are five exchange-traded funds devoted to tail risks in the U.S. -- three of which were launched last year alone. The Cambria Tail Risk ETF (ticker TAIL) remains the biggest of its kind by far, and sat on a record $425 million of assets last month -- more than six times the pre-pandemic level.

“Given what we saw with unpredictable events like Russia, this puts a new focus on tail risk and risk mitigation ETFs. These will do well during big market shocks -- like March 2020 and Russia invasion,” said Athanasios Psarofagis, an ETF analyst with Bloomberg Intelligence.

A market Black Swan event is typically deemed as a more than three standard deviation move from the norm, with the odds of materializing just 0.3% in theory. Typically speaking, strategies designed to protect during such a move also try to stay flat during quiet periods by using multi-asset options that maintain their value or even increase over time, rather than decaying.

The PGIM Wadhwani Tail Risk Strategy -- which initially launched for a big client and is not publicly marketed -- is designed for a windfall during a tail-risk event. But the Cayman Islands-listed strategy also trades commodities and Chinese fixed income in order to generate gains in normal markets.

“You want things in your portfolio which don’t cost you money in good years but which pay off in bad times,” Wadhwani said about the strategy that has so far returned 13% just two months after its launch. “Our strategy is convex in a bad scenario -- if the scenario is bad we tend to make quite a lot of money.”

Critics warn insurance premiums can eat long-term returns. A 2020 study by AQR Capital Management LLC found that a portfolio of out-of-the-money put options on the S&P 500 wins handily in short-term negative events, but the ongoing costs lead to underperformance during bad periods lasting longer than about three years.

Recent history offers fresh evidence that doomsday hedging can be loss-inducing, with the funds down 10% last year, per Eurekahedge.

Yet demand for stock hedges remains elevated with the 20-day average Cboe put-to-call ratio recently near the highest since May 2020. And with the threat of freakish market moves ever-present while Fed-induced recession fears pile up, there could be further gains in store for defensive strategies bracing for the next big one in global markets.

“Since quantitative easing, volatility has become polarized,” said Alberto Gallo, a portfolio manager at Algebris UK Ltd. “There’s more days of sun, but when there are spikes, things get really ugly.”