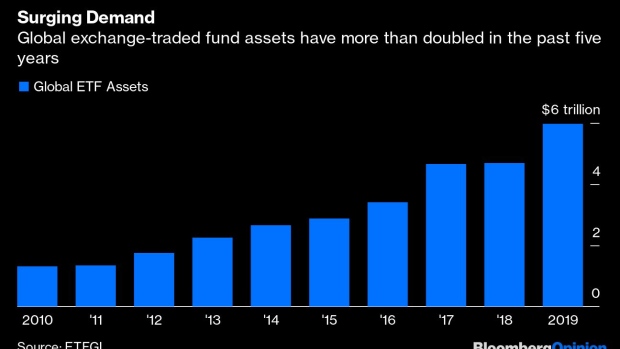 (Bloomberg Opinion) -- BlackRock Inc., the world’s biggest fund manager with $7 trillion of assets, says it plans to “place sustainability at the center of our investment approach.” As environmental, social and governance issues become more pressing, especially for younger savers, it’s a savvy business move that will pressure its peers to follow suit.

But there’s a problem. With about two-thirds of the money it manages allocated to index-tracking funds, the issue of how to harness the resources in passive products — the bulk of which command fees that are too low to finance costly and time-consuming engagement with company boards — remains unaddressed.

In his annual letter to company executives published Tuesday, Chief Executive Officer Larry Fink says the financial world is undergoing “a fundamental reshaping” as the climate crisis becomes more apparent. “Our investment conviction is that sustainability- and climate-integrated portfolios can provide better risk-adjusted returns to investors,” he writes.

BlackRock’s move comes as the world’s fund managers find themselves at the forefront of populist pressure to do more to save the planet. As the world’s principal allocators of capital, money managers are being scrutinized like never before — and are being found wanting in many cases. BlackRock’s annual investment stewardship report, for example, shows that in the year to mid-2019, it interacted with 256 companies on “environmental risks and opportunities.” While more than 80% of those discussions were on climate specific risks, the firm voted in favor of just four shareholder proposals pressing U.S. companies to implement policies designed to prevent the average global temperature from increasing by more than 2 degrees Celsius. Hence the criticism.

Non-profit group Majority Action examined the U.S. voting record of 25 of the world’s biggest asset managers and what it found wasn’t pretty. BlackRock and Vanguard Group Inc. voted against at least 16 climate-related proposals which would have passed with their backing, a report the group published in September found.

Earlier this month, BlackRock joined Climate Action 100+, a group of more than 370 fund managers that champions engagement with companies to limit their greenhouse gas emissions. The organization now has $41 trillion of firepower to rain down on companies that are deemed to be hurting the planet. But the trillions of dollars in the growing ETF category are unlikely to participate in that activism. So far, ETFs designed to cater to ESG-minded investors have about $20 billion of assets spread across more than 100 products, with more than 30 such ETFs introduced in the past two years, according to data compiled by Bloomberg Intelligence.

While the ESG subset is dwarfed by the $6 trillion of global assets that ETFs have garnered in recent years, it attracted a record $8 billion of inflows in 2019, a trend that’s likely to continue accelerating as the climate crisis continues to attract headlines — and dollars.

In an interview with the New York Times, Fink acknowledged that the firm’s passive index funds aren’t able to ditch the shares of companies it deems not to be acting in line with its views on sustainability. Moreover, he says in his letter that governments will dictate the speed at which the world moves to a lower-carbon economy. “Under any scenario, the energy transition will still take decades,” he writes.

Within this environment, BlackRock says it’s seeking a tenfold increase in the assets dedicated to sustainable investments in the coming decade, to $1 trillion from about $90 billion currently. It plans to double the number of ESG-related ETFs it offers to 150.

So BlackRock’s late arrival to the ESG party makes good business sense for the firm, and is great news for the planet. But the broader issue of how passively managed money can participate in the climate fight remains unresolved.