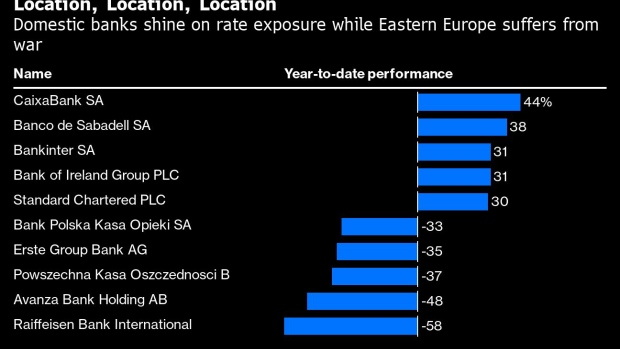 A customer approaches the entrance to a Banco de Sabadell SA bank branch carrying a multicolored umbrella on Via Laietana in Barcelona, Spain, on Thursday, Oct. 19, 2017. Spain’s government issued a statement on Thursday morning invoking Article 155 of the Constitution “to restore the legality” of the semi-autonomous region. , Bloomberg

(Bloomberg) -- Soaring inflation and recession concerns upended what was turning into a marquee year for European bank stocks. Yet from BlackRock Inc. to Amundi SA, some investors are becoming more optimistic on prospects for a sector that’s seen as well capitalized and trading near the cheapest levels in a decade.

A year that started so well for the region’s lenders began to go awry after Russia’s invasion of Ukraine led to fears over the impact on economic growth. After gaining as much as 15% in the first weeks of the year and outpacing all other sectors, the Stoxx 600 Banks Index has reversed the advance.

According to Amundi’s head of equities, Kasper Elmgreen, Europe’s lenders are much less risky than they used to be and have very strong capital ratios. Nigel Bolton, co-chief investment officer of BlackRock Fundamental Equities, is also upbeat, saying in an interview that it’s the right time to add exposure to the sector based on “an extreme valuation opportunity.”

Optimism over the benefits of rising interest rates has been replaced by worries over the possibility of a recession, fueling renewed anxiety around a sector which has had the burden of underperforming for more than a decade. Banks currently trade at a 40% discount to the Stoxx 600 based on forward price-to-earnings ratios, near the bottom of a 20-year range.

That’s much to the chagrin of bosses such as Banco Santander SA’s outgoing Chief Executive Officer José Antonio Álvarez, who earlier this month expressed his “frustration” over the lender’s share price.

Also set to support the shares: this year’s rally in bond yields. While yields have fallen back slightly, they remain much higher than the near-zero or negative levels of 2020 and much of 2021, and that’s set to boost earnings. According to Citigroup Inc. analysts, every increase of 25 basis points in European interest rates brings a 4% rise in earnings forecasts for euro-area lenders. Those that are set to benefit the most include Banco de Sabadell SA, Commerzbank AG, Bankinter SA and Societe Generale SA, they said.

David Navarro, equities fund manager at Andbank Wealth Management in Madrid, believes it’s “now or never” for the region’s banks, which are trading more than 50% below where they were prior to the 2008 financial crisis.

“If we don’t go into recession, low valuations, rising rates, well capitalized lenders, with enough provisions and good dividends make for a good investment case,” he said in an interview.

What’s more, takeover deals are back on the table. Bloomberg reported this month that France’s BNP Paribas SA has expressed interest in a potential acquisition of Dutch competitor ABN Amro Bank NV, reviving expectations for a wave of consolidation in the sector.

For Cristina Benito, head of equities for discretionary portfolios at Mapfre Asset Management, taking a selective approach will be crucial. “There may be value in those banks that are more defensive, with healthier balance sheets and whose income is more sensitive to rising interest rates,” she said by email.

To be sure, should last week’s plunge in Bund yields extend for a prolonged period and credit spreads continue to widen, banks could be in more trouble.

JPMorgan Chase & Co. analysts say lenders are likely to “materially underperform” leading up to any recession, but will become “excellent buys” when bad debt provisions peak. And Bank of America strategists led by Sebastian Raedler are underweight banks, seeing them as vulnerable to any decline in bond yields brought on by falling demand and weakening growth.

Here’s a look at share price performances of European banks by region:

Spanish lenders are the most geared toward rising interest rates as their main business of lending is mostly focused on real estate loans, which will reprice as the European Central Bank raises rates. CaixaBank SA and Sabadell are the best-performing banking shares in Europe this year, with gains of more than 35%, and other domestic lenders such as Bankinter and Unicaja Banco SA are also in the green.

Doubts about the ability of the ECB to control the fragmentation of sovereign debt in the region have hit Italian banks hard, with some having also suffered from their exposure to Ukraine and Russia. UniCredit SpA is down 27% this year, with Intesa Sanpaolo SpA falling 19%. And while it has been relatively quiet on the political front, next year’s general election could fall right into a potential recession and spark political skirmishing that usually bodes ill for banks.

With classic lending business models, Dutch and German banks such as Commerzbank, ING Groep NV and ABN Amro NV tend to be big beneficiaries of higher rates. Deutsche Bank AG, meanwhile, is a recovery story for many investors, just with less momentum than a year ago, while Commerzbank and ABN Amro are viewed as among the more likely takeover targets.

While the Bank of England is ahead of the ECB in terms of raising rates, the benefits for UK lenders are outweighed by mortgage risks and recession concerns similar to the wider market. And while six years have passed since Britons voted to leave the European Union, Brexit still haunts the local stock market. Meanwhile Europe’s biggest bank, HSBC Holdings Plc, is fighting a call from its largest shareholder to split off its Asian business.

With a high exposure to wealth management, UBS Group AG and Credit Suisse Group AG are usually seen as having a stable business model. While UBS is among the top picks of some analysts, shares of Credit Suisse have plummeted 33% this year and hit a record low in June, hurt by a series of scandals and setbacks including a $5.5 billion hit from Archegos Capital Management, the collapse of partner Greensill Capital and a string of profit warnings.

Raiffeisen Bank International AG is the worst-performing lender on the Stoxx 600 Banks Index this year, falling 59% due to its exposure to Ukraine and Russia. Meanwhile, Polish banks are under pressure to immediately write off the expected costs of mortgage payment holidays proposed by the government to protect borrowers from rapidly rising interest rates.