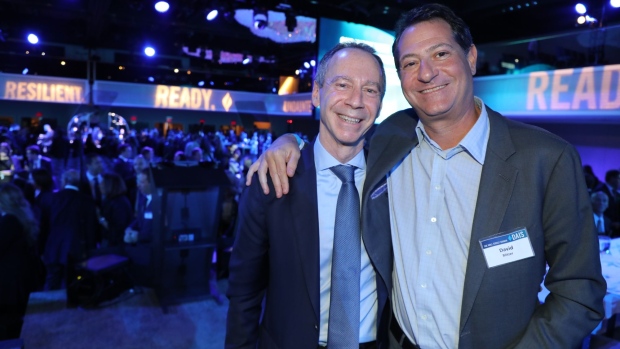 (Bloomberg) -- Wall Street may be going more casual, but not at the UJA Wall Street Dinner.

Blankfein joked that his “biggest anxiety” in the two years since the last in-person event was being able to fit into his suit, and he did just fine, on a night that raised a record $32 million.

He also had no problem slipping back into his signature humor, referring to those attending virtually as “the guys who still take risk management seriously.”

But Blankfein quickly found a different kind of footing. As chief emcee of the event, he seized on the spotlight to make a call of conscience for the 1% to address the bifurcation of society the pandemic has aggravated.

While some people made money when the markets went up, got to work in nice places, dine in outdoor restaurants and play golf, others worked with kids in tiny apartments, lived paycheck to paycheck or lost their jobs, he said.

“Sadly, I don’t naturally engage with many of those people,” Blankfein said. “But there are a lot more of them than there are of us. That is the larger bubble less familiar to many of us, the bubble in which UJA operates.”

UJA was created more than a 100 years ago to serve urgent needs in the Jewish community. That’s what it does still. Nonprofits it funds include those that provide food and job assistance, and operate camps offering a retreat from the city. (Blankfein went to one himself as a kid from Brooklyn).

During the pandemic, UJA spent an extra $70 million on programming, which included more than 2,700 vaccinations for Holocaust survivors. It also upped the fight against increasing waves of anti-Semitism.

“It’s our duty to make other people know it is their duty,” Blankfein said. “We do it by example, by recruiting, by having events like this, by talking about the past and other people who’ve done it. I can try to pass along that culture.”

The event honored Michael R. Bloomberg, the founder and majority owner of Bloomberg News parent Bloomberg LP, and Goldman’s Cohen, who is co-head of consumer and wealth management.

“Stephanie is in a long line of people who are very smart, very confident, on a very high trajectory, and committed to the themes of this gathering, which is philanthropy and also acknowledgment of pride in the community,” Blankfein said. “I’m proud to see how well Goldman is represented here.”