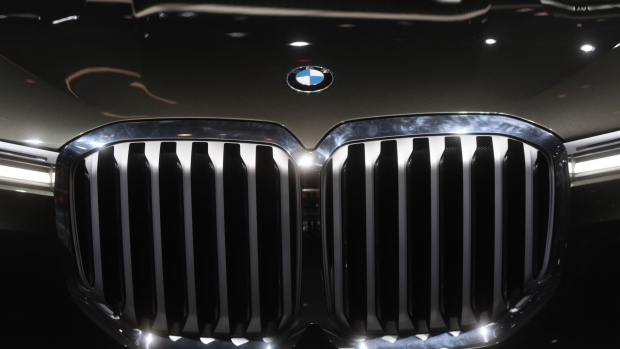 A badge sits above the grille of a BMW X7 sports utility vehicle, manufactured by Bayerische Motoren Werke AG (BMW), during the second media preview day of the IAA Frankfurt Motor Show in Frankfurt, Germany, on Wednesday, Sept. 13, 2017. The 67th IAA opens to the public on Sept. 14 and features must-have vehicles and motoring technology from over 1,000 exhibitors in a space equivalent to 33 soccer fields. Photographer: Simon Dawson/Bloomberg , Bloomberg

(Bloomberg) -- BMW AG outsold Daimler AG’s Mercedes-Benz in the U.S. for the first time in four years after blowing out its rival in the final month of 2019.

BMW sold 35,746 cars and sport utility vehicles in December, finishing the year ahead by more than 8,700 units. The Munich-based manufacturer staged a revival in the U.S. market this year by filling out its SUV lineup with the massive new X7, after keeping dealers waiting on the three-row model for a decade.

--With assistance from Melinda Grenier.

To contact the editors responsible for this story: Craig Trudell at ctrudell1@bloomberg.net, Melinda Grenier