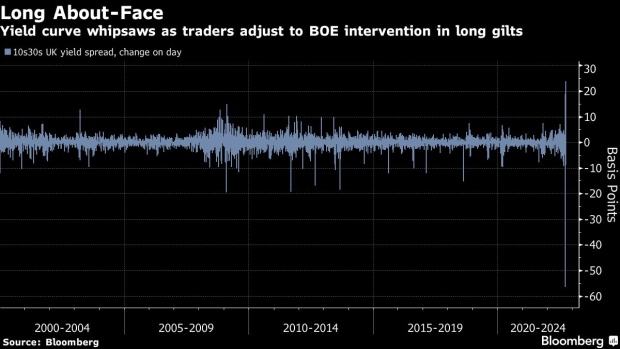 (Bloomberg) -- UK bond markets face a potential “cliff edge” when the Bank of England exits the market at the end of next week, leaving traders to navigate a turbulent backdrop without the support of a buyer of last resort.

Longer-term gilt yields are already starting to creep higher as the Oct. 14 end date for its bond-buying looms into view, partly as policy makers make it clear they are in no mood to simply prop up prices for traders.

So far, the central bank has used only a fraction of its £100 billion ($114 billion) warchest to buy bonds directly, yet its very presence as a backstop has helped bring stability and prevent a full-blown crisis spurred by forced selling from pension funds.

Markets face a “potential cliff edge” once support is withdrawn, said Daniela Russell, rates strategist at HSBC Holdings Plc. “Although long-end gilt yields are off the highs we saw before the BOE intervened, they are still high – and potentially at unpalatable levels for many pension schemes.”

That’s left analysts calling for other measures to further safeguard the markets from liquidity crises, such as a permanent backstop or new facility, or even a delay to the BOE’s plan to sell the bonds it accumulated under quantitative easing.

The bank’s intervention has also brought the government time to address the fundamental concerns over its policies that drove the market chaos in the first place.

While Chancellor of the Exchequer Kwasi Kwarteng’s U-turn on scrapping a tax for higher earners help soothe some nerves, concerns over how the government’s fiscal plan will be funded continue to weigh on gilts. The yield on benchmark 30-year bonds has climbed over 60 basis points from a low on Monday.

Here a look at some of the BOE’s options after Oct. 14:

The central bank has said it will buy £5 billion a day under its current plan, but it has only purchased a total of £3.7 billion in the first week of the plan, and bought nothing at all on Tuesday and Wednesday.

That pattern has forced the market to start to acknowledge the withdrawal of support. Already the sudden drop in long-end yields following the intervention has been partially reversed. On Tuesday, the yield spread between 10-year and 30-year bonds saw its largest increase on record as traders scrambled to adjust after the BOE announced the lack of any purchases.

That gives a clue of what may happen if the support is withdrawn at the end of next week, with further pressure on longer-maturity debt coming from the high levels of gilt issuance still tabled in to fund the UK’s expansive fiscal policy. Still, some investors argue the BOE’s record of stepping in to calm market turbulence will act as a tacit promise that it will backstop future crises if needed.

“They seem pretty clear that they want to stop on Oct. 14. -- that this is a targeted measure and a time limited measure,” said Peter Goves, fixed income research analyst at MFS Investment Management. The end of the BOE temporary intervention “need not be a market negative. I think the market has accepted that the Bank of England is there in times of dysfunction.”

Some investors are concerned that afflicted parties such as pension funds will not have had enough time to recover from the disruptions of last week. HSBC’s Russell, who successfully predicted the initial plan, suggests the BOE could consider a “new long-term backstop” to allow pension funds time to adjust.

That could include a commitment to carry out purchases of long-dated bonds on whatever scale is necessary to support market functioning -- a tool which ideally would “never need to be deployed,” she added.

“The Bank of England’s gilt-market intervention may have eased the crisis for now but with the UK government intent on its expansionist policies and the bank expected to raise rates to combat inflationary pressures, it’s still uncertain what may happen after purchases of long bonds end Oct. 14. LDI managers are building collateral waterfalls to identify what they could liquidate to meet future calls as rates rise.”

Even without an explicit new tool, the BOE could still keep the cash earmarked for bond purchases on hand for “future fragmentation in the market,” said Pooja Kumra, a rates strategist at Toronto-Dominion Bank.

The reversion back to bond purchases, typically a tool used in monetary easing, during a period of rampant inflation and tightening central bank policy has also unsettled some investors. There have been calls for the BOE to create a new tool to deal with financial stability risks and provide liquidity for market participants outside of bond-buying.

That would be similar to during March 2020, according to Gilles Moec, group chief economist at AXA Investment Managers, when central banks created facilities to allow liquidity injections to a wider pool of financial entities.

“The suddenness of the spike in rates last week might explain why the Bank of England could not put together a similar mechanism speedily enough, but it is a well-recognized “chink in the armor” of the central bank’s financial stability framework,” he wrote.

The BOE could also delay the start of selling its bonds, known as active quantitative tightening, as a way of bringing more support. Already postponed to Oct. 31 during last week’s turbulence, some investors see a potential for it to be pushed back again. The BOE said it still plans to sell around 80 billion pounds of gilts over the next year.

“Our base case will be that they may have to dial back on expectations for starting QT at the end of this month,” said Nick Sanders, a portfolio manager at AllianceBernstein.

The BOE could allow other national authorities to impose financial regulations to better safeguard against future liquidity crises. The Pensions Regulator has already been pushing defined-benefit programs to review the resilience and liquidity of their investments, risk management and funding arrangements.

It is meeting with the government about the recent collateral calls, according to Chloe Smith, secretary of state for work and pensions.