Boeing Co. warned it will consider slowing or even temporarily halting production of the 737 Max, the company’s most important jetliner, if a global flying ban drags on longer than anticipated.

The planemaker’s best estimate is that it will submit software updates and paperwork for the Max by September to the Federal Aviation Administration, followed weeks later by approval to resume passenger flights, Chief Executive Officer Dennis Muilenburg said Wednesday. But he cautioned that Boeing can’t foot the costs of building and storing undelivered aircraft indefinitely.

The 737 Max is already more than four months into an unprecedented global grounding, which authorities ordered after two fatal crashes. The manufacturer provided hints of the strain on its resources, starting with a US$1.01 billion burn of free cash flow in the second quarter -- a US$5 billion swing from last year’s gain during the same period.

“They have to prepare for any eventuality,” said George Ferguson, an analyst with Bloomberg Intelligence. A fourth-quarter restart for the Max remains the likeliest outcome, especially with FAA officials working on-site with Boeing on a resolution, he said. But “if something happens to extend that, they can’t just keep building planes.” 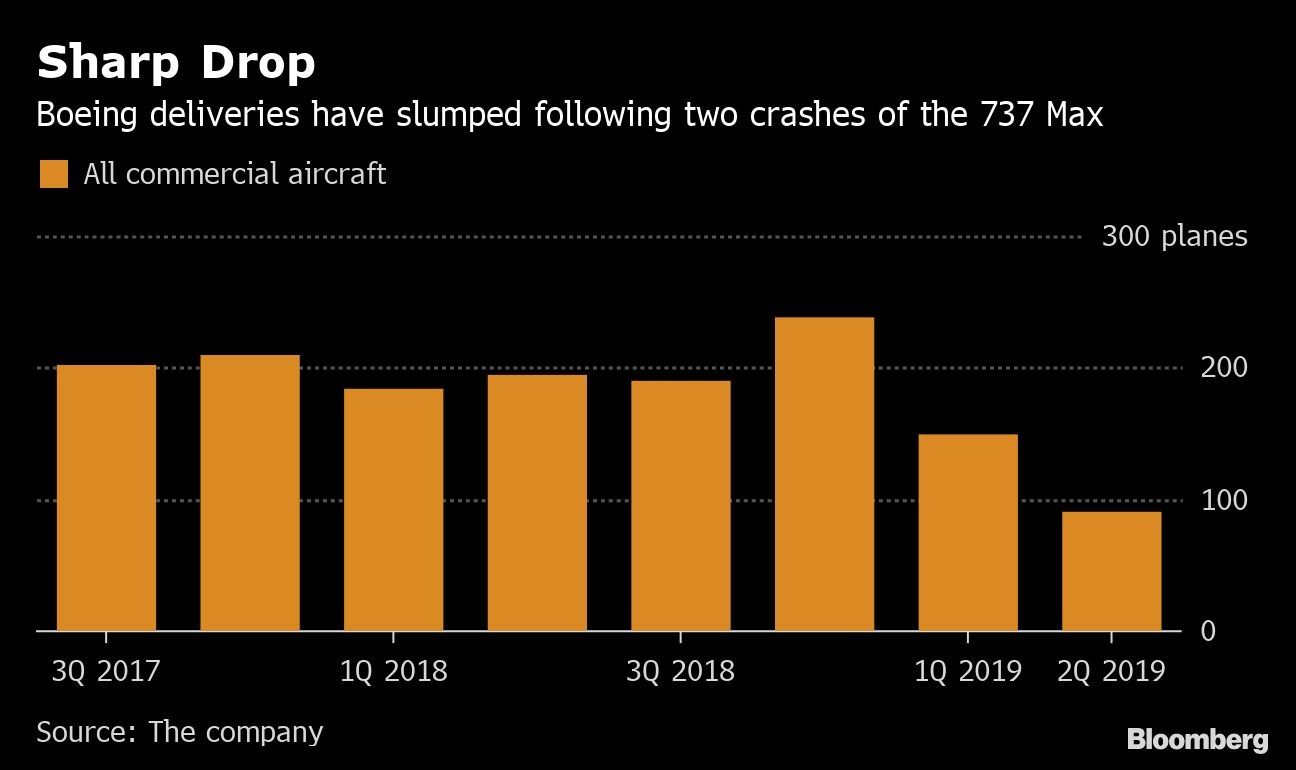 The shares fell 2.9 per cent to US$362.16 at 2:43 p.m. in New York, the second-biggest drop on the Dow Jones Industrial Average. Through Tuesday, Boeing had slid 12 per cent since an Ethiopian Airlines 737 Max 8 plunged into a field March 10, prompting the grounding.

Boeing also disclosed some bad news on another front: the 777X, the upgraded version of its behemoth wide-body jet.

“Engine challenges” are delaying the first flight to early next year, Boeing said in a statement as it reported earnings. And while the company said it’s still targeting late 2020 for the first delivery, it warned that “there is significant risk to this schedule” because of the engine issues.

“We are not surprised to see 777X slip and while delays are not good in principle, there are mitigating factors here,” Seth Seifman, an analyst at JPMorganChase & Co., said in a note to clients.

The delay helps Boeing save cash on development and deferred production costs, he said. Airlines aren’t “clamoring” for large wide-body jets given low fuel prices. And “there is probably still a lot to iron out regarding the certification process for this aircraft.”

The wide-body 777X is Boeing’s first new jetliner since the 737 Max, the single-aisle workhorse that remains the company’s biggest challenge.

The total bill for Boeing stands at US$8.3 billion -- and counting -- as the global grounding of its best-selling aircraft drags on.

The manufacturer continues to churn out 42 single-aisle 737 jets a month to dull the blow to suppliers. Since airlines and lessors can’t take delivery of Max planes with the flying ban in place, payments to Boeing have dropped while the company absorbs the expense of storing about 150 newly built aircraft.

Boeing last week revealed a US$5.6 billion pretax charge to compensate airlines and lessors, outlining for the first time costs that could linger for years in the form of discounts on future jet orders, spare parts and services. The Chicago-based company also added another US$1.7 billion to its anticipated 737 production cost, bringing the total drag against future profit from disrupted Max output to US$2.7 billion.

The accounting charge clipped US$8.74 a share from earnings. Boeing swung to a core loss of US$5.82 a share, according to a company statement. Analysts had expected a profit of US$1.98 a share, according to the average of analyst estimates compiled by Bloomberg. The charge didn’t appear to be fully reflected in expectations.

“I don’t think anyone had great visibility,” said Ken Herbert, an analyst with Canaccord Genuity.

Sales plunged 35 per cent to US$15.8 billion. Analysts had predicted US$20.4 billion. Inventory, already at a record US$65.4 billion in the first quarter, soared to US$68.5 billion.

There’s never been an indefinite halt to commercial flights ordered for an airplane as significant to airlines and Boeing as the 737 Max, which has a backlog of 4,415 unfilled orders.

Regulators in U.S., Europe, Canada and other nations are reviewing an update for software linked to the crashes, as well as possible changes to pilot training and other aspects of the Max.

Boeing’s sprawling operations and low debt leverage have helped shield it from the grounding’s impact. Boeing was bolstered from improved profitability for another source of cash, the 787 Dreamliner. Deferred production costs for the Dreamliner fell US$1.06 billion to US$21 billion in the quarter, the company said on its website.

While revenue and profit plunged for Boeing’s commercial airplane business due to the Max, the other divisions were solidly profitable with mid-teens profit margins targeted by Muilenburg.

Boeing held US$9.6 billion in cash and marketable securities at the end of the quarter, up from US$7.7 billion a quarter earlier. The company’s consolidated debt jumped by US$4.5 billion to US$19.2 billion.

“Investor focus on the 737 Max still appears to be very short termist, and so clarity on the return to flight is likely to be a positive catalyst,” said Rob Stallard, an analyst at “However, the longer-term ‘big picture’ implications of the Max grounding could end up haunting Boeing for many years to come.”