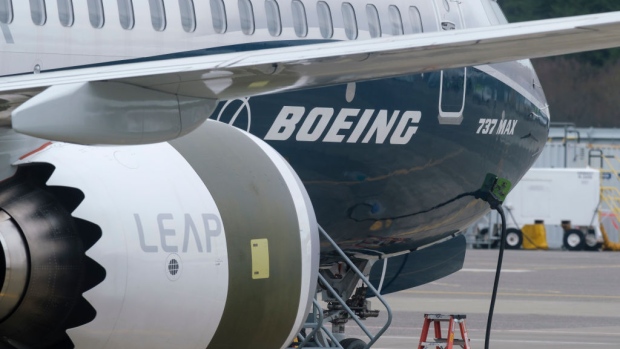 Airlines have begun inspecting 312 of Boeing Co.’s 737 family of aircraft, including some of the grounded 737 Max, because they have wing components that are prone to cracking. The parts must be replaced within 10 days, U.S. regulators said.

Boeing informed the Federal Aviation Administration that so-called leading-edge slat tracks may not have been properly manufactured and pose a safety risk, the agency said in an emailed statement Sunday. The parts allow the wing to expand to create more lift during takeoff and landing. U.S. carriers reported few aircraft covered by the warning Monday and said flight schedules wouldn’t be affected.

While less critical than the global grounding of its 737 Max since March, Boeing’s latest production issue adds another headache for a management team trying control the fallout from two deadly crashes and get the U.S. manufacturer’s top-selling plane flying again. The head of the International Air Transport Association warned airline CEOs at the industry’s annual gathering this past weekend that the plane-approval process is damaged and the industry is under scrutiny.

The FAA plans to issue an order calling for operators of 737 planes worldwide to identify whether the deficient parts were installed and, if found, to replace them. A complete failure wouldn’t lead to a loss of the aircraft, the FAA said, but could cause damage during flight.

Boeing has notified operators of the planes about the needed repairs and is sending replacement parts to help minimize the time aircraft are out of service, the company said in a statement. The slat tracks in question were made by a supplier to Spirit AeroSystems Holdings Inc., Boeing said in an email.

Shares of the planemaker fell less than 1 per cent to US$338.89 at the close in New York, while Spirit AeroSystems was little changed at US$81.14.

Boeing has identified 148 parts made by a subcontractor that are affected. The parts may be on a total of 179 737 Max aircraft and 133 737 NG planes worldwide, including 33 Max and 32 NG aircraft in the U.S., the FAA said. The NG, or Next Generation, 737s are a predecessor to the Max family.

Southwest Airlines Co., which had 753 Boeing 737s in its fleet at the end of March, said that while conversations with Boeing were continuing, it appeared that fewer than 10 of its planes are affected. Checks and any needed repairs were not expected to affect operations, Chris Mainz, a Southwest spokesman, said in an email. Southwest’s fleet includes 34 grounded Max aircraft.

American Airlines Group Inc. said the inspection requirement will not affect its 737 NG fleet, but at least one of its Max planes are among those seen as most likely to have the parts in question, said Ross Feinstein, a spokesman for the airline. It was still determining if more Max were involved. American has about 300 737-800s in its fleet and 24 Max.

Delta Air Lines Inc. plans to inspect and, if found, replace the part Monday night on one 737 NG covered by Boeing’s warning, said Catherine Simmons, a spokeswoman for the Atlanta-based carrier. Delta was still working with Boeing to see if any other of its 208 NGs need reviews. United Continental Holdings Inc. said none of its 737 NGs have the wing parts and none of its 14 Max aircraft are “high risk.” Alaska Air Group Inc. also has one NG affected.

The deficient parts may be on fewer of the identified planes, Boeing said. While the full list of jets must be inspected, 20 Max and 21 NG aircraft are “most likely” to have the suspect parts installed, according to the company.

The 737 Max has been grounded worldwide since March 13 after two fatal crashes tied to a malfunction that caused a flight control system to repeatedly drive down the plane’s nose. Boeing is finalizing a software fix along with proposed new training that will be required before the planes fly again.